3 Ukrainians, 2 Indians and a Russian kidnapped from oil vessel off Nigeria coast 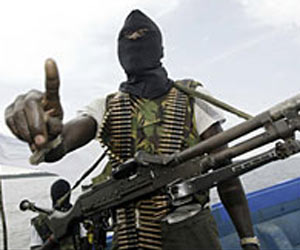 20 February 2013, ABUJA, Nigeria – Gunmen attacked a vessel off the coast of Nigeria’s oil-rich southern delta, kidnapping six foreigners in an area that has become increasingly dangerous for oil companies and shippers, a police official said Wednesday.

Foreign companies have pumped oil out of the Niger Delta, a region of mangroves and swamps the size of Portugal, for more than 50 years. Despite the billions of dollars flowing into Nigeria’s government, many in the delta remain desperately poor, living in polluted waters without access to proper medical care, education or work.

The poor conditions sparked an uprising in 2006 by militants and opportunistic criminals who blew up oil pipelines and kidnapped foreign workers.

That violence ebbed in 2009 with a government-sponsored amnesty program that offered ex-fighters monthly payments and job training. However, few in the delta have seen the promised benefits and sporadic kidnappings and attacks continue.

Pirate attacks are on the rise in West Africa’s Gulf of Guinea, which follows the continent’s southward curve from Liberia to Gabon. Over the last year and a half, piracy there has escalated from low-level armed robberies to hijackings and cargo thefts. Last year, London-based Lloyd’s Market Association — an umbrella group of insurers — listed Nigeria, neighbouring Benin and nearby waters in the same risk category as Somalia, where two decades of war and anarchy have allowed piracy to flourish.

Sunday’s kidnapping is just the latest attack in the region. On Dec. 17, gunmen kidnapped five Indian sailors on the SP Brussels tanker as it sat about 40 miles (64 kilometres) off the coast of the Niger Delta. That came the same day gunmen abducted four South Koreans and a Nigerian working for Hyundai Heavy Industries Co. at a construction site in the Brass area of Bayelsa state. Those workers were later released, though the Indians are still believed to be held by the abductors.
*Bashir Adigun, The Associated Press