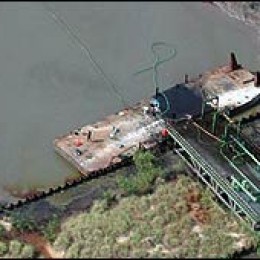 08 March 2012, Sweetcrude, Abuja – The Management of the Nigerian National Petroleum Corporation, NNPC, on Wednesday raised the red flag on what it termed sustained nefarious activities of oil pipeline marauders whose activities are posing a potent threat to the successful operation of both the upstream and downstream sectors of the oil and gas industry.

Speaking at an interactive forum between top Management of the NNPC and the Board and Commissioners of the Revenue Mobilization Allocation and Fiscal Commission, RMAFC, Group Managing Director of the Corporation, Engr. Austen Oniwon, declared that pipeline vandalism presents the single biggest threat to the smooth operation of the petroleum industry today in the country, noting that if left unchecked Nigeria will wake up one day to discover that pipeline thieves have taken over the country.

“In the last few months we have lost millions of dollars in shut-in oil wells as a result of the activities of oil thieves who breach our crude lines to steal oil. So far the Trans-Forcados and the Trans-Niger Trunk lines have been shut-in due to attack on the facilities by thieves,’’ Oniwon stated.

The NNPC helmsman stated that the activities of the oil thieves is also a menace to the downstream sector where increased vandalisation of petroleum product pipelines has made it almost impossible to pump products to the depots across the country through the pipelines thereby depending on bridging with trucks.
“Let us take this menace a bit further by looking at the danger it poses to our collective existence as a nation. If we fail to curb this trend we are inadvertently empowering these criminals to take over our Local Government Areas and by the time they do that they would move on to take charge of the States since they now have the resources to decide who get to power and one day we may as well wake up to discover that they have taken over the entire country,” the GMD noted.

Oniwon warned that the situation, if left unchecked could degenerate to the scenario in countries like Mexico and Colombia where criminals have empowered themselves through nefarious activities and now call the shots because they have stolen so much from the system through under world operations.

“These criminals steal both crude and refined petroleum products and sell same to enrich their pockets, we must work collectively to stop them,” Oniwon urged.

Going forward, the GMD pledged to make the interaction with the RMFAC Commissioners a regular exercise noting that the Corporation is willing to work with the Commission and other agencies of government to ensure public accountability through improved communication with all stakeholders.

Responding, Engr. Elias Mbam, Chairman of RMFAC thanked the NNPC Top Management for the visit to the Commission’s Secretariat which he termed as the first of its kind in the history of the NNPC/RMFAC relationship.

Engr. Mbam also pledged the willingness of the Commission to work in concert with the NNPC in such a way as to ensure that the country derives full benefits from the proceeds of the God-given hydrocarbon resources.