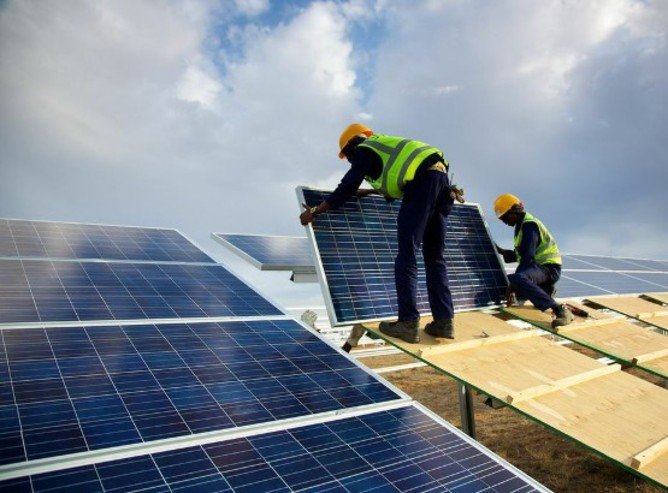 London — Children from poor families in sub-Saharan Africa have been able to swap cleaning up cowpats for lessons thanks to a solar power project that rewards parents for sending them to school.

South Korean solar firm Yolk has designed a cow-shaped solar power station for schools that can be used to charge power banks for families while their children are in class.

The design references the fact that many children are removed from school in order to care for their family’s cattle.

About 262 million children between the ages of 6 and 17 – or one out of every five globally – do not attend school, according to data from the United Nations education body UNESCO, which said access to education was largely shaped by wealth.

Many poor families require children to stay at home and help with household tasks.

“The parent is the key man – so all of this is about how we persuade parents to send their kids to school,” said Chang.

She began researching how the company could help tackle child labour and said she quickly realised they had to offer a “tangible” incentive to families.

“If the value is similar or more, then they’re willing to send their children to school rather than the workplace,” she said.

As a solar company, the energy was an obvious solution – and power is also an expensive commodity in developing countries.

Many rural homes are not connected to the grid, meaning that households may have to walk several hours to reach a charging shop and pay to charge devices such as phones.

‘Solar cow’ charging stations are installed in schools and pupils are given a milk-bottle-shaped power bank which they plug into to charge if they attend class and take home at the end of the school day to provide households with electricity.

Each milk bottle contains about a dollar’s worth of electricity – a significant asset for the poorest families – and it can also be connected to a bulb fitting to provide up to 10 hours’ of light.

The first solar cow was set up in Pokot, Kenya, in July 2018, and Chang said it has resulted in children attending classes more regularly.

Yolk plans to establish several more in Tanzania with funding from the South Korean International Cooperation Agency, a governmental aid, and development agency.

“This can create a really big impact,” said Chang.

“When you solve problems like child labour it requires a lot of money – but because we use solar energy, the power of nature in a creative way, it can be a lot easier.”