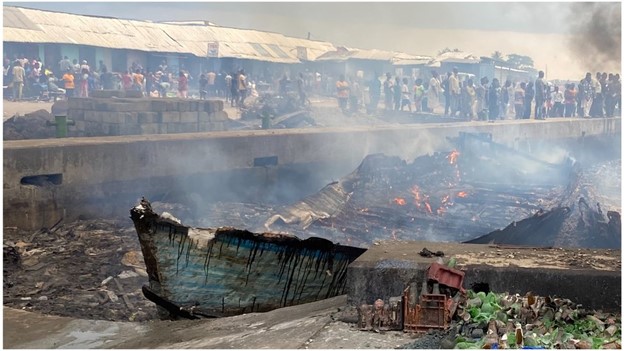 Port Harcourt — Not less than six people are feared dead following a fire explosion at an illegal oil refinery, in a boundary forest between Ibaa community in Emohua and Isiokpo community in Ikwerre Local government Areas of Rivers State.

Our correspondent gathered that the victims, including two soldiers and four civilians working for the military personnel died after the fire engulfed their vehicle, as the vehicle got stuck in a mud inside the forest.

The soldiers, who are reported to be attached with Operation Still Waters, had hired some civilians to assist them in search of illegal oil bunkering and refining sites in the forest, when their vehicle got stuck on a bad spot of the road.

An indigene of Ibaa community identified as Peter Ndu, who confirmed the incident to our correspondent, disclosed that the fire was ignited by increased acceleration, when the driver of the Security vehicle, in an attempt to drive the car out from the mud.

Ndu explained that the increased firing from the vehicle ignited the fire leading to the number of casualties, while several others have been rushed to the hospital.

It will be recalled that in April 2022, over 100 persons were burnt to death in a similar fire explosion at an illegal oil refining site in Abaezi forest, the boundary between Rivers and Imo State.