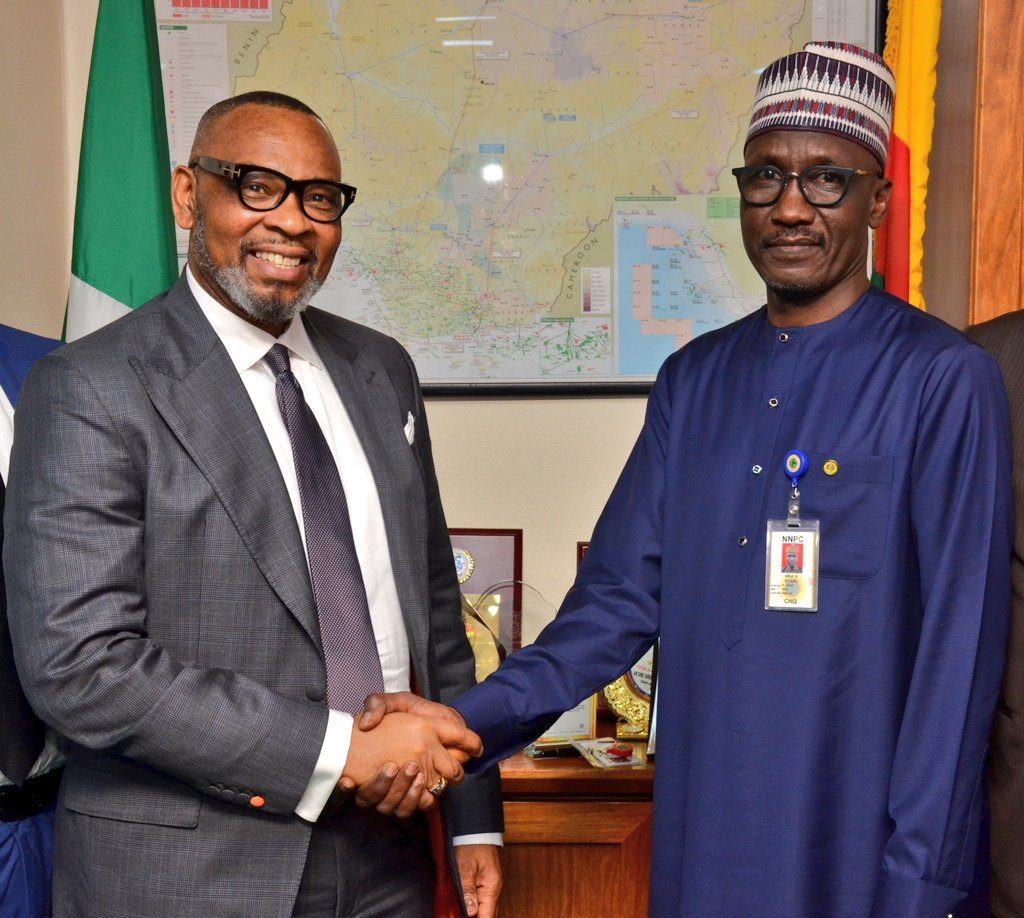 *GMD of Aiteo, Victor Okoronkwo with Mele Kyari, GMD of the NNPC.

He stated this while speaking at a panel session at the recently concluded 2019 Annual Conference and Awards of the National Association of Energy Correspondents (NAEC) in Lagos. on the topic: Effect of sanctity of contract on commercial operation.

‘Lack of appropriate synergy between policy makers and players in the energy sub-sector is a major factor for the nation’s epileptic electricity supply,’ he added.

According to Okoronkwo, government should show greater commitment to power generation by providing a favourable environment in order to attract more investors.

He said that Aiteo Group is negotiating an alternative financing package that would enable it fund about $5 billion investment to be able to increase its oil production to about 250 000 barrels per day (bpd).This will also grow gas output to about 3 million standard cubic feet per day (mmscfd) of gas.
‘There will be a blend of financing options depending on the alternative financing mechanism the company is working out with its joint venture partner.’

In another conference in Abuja, Okoronkwo said that Aiteo operates key strategic business of oil infrastructures in Nigeria and a major stakeholder across the energy value chain with huge investments in the country. The company, Okonkwo said, was one of the biggest single investment decision makers up to 2014, when it invested over $2.5 billion in acquiring oil milling lease (OML) 29 asset.

“The company is Nigeria’s largest indigenous company by production and we are committed to producing between 80,000 bpd and 90,000 bpd. ‘’In the short to midterm, we are going to 150,000 bpd and in the mid to long term we are going to 250,000 bpd, we want to secure energy supply for the rest of Africa and move from fossil fuel to clean fuel’’, he stated.

The Aiteo chief explained that the challenges in the industry call for the need for the Federal Government to conclude on the Petroleum Industry Bill (PIB) to secure oil and gas infrastructure. “If the government can do that, we will have more money available to build infrastructure for the country and save our petro dollars,” he said, adding that Aiteo as one of the pioneers of indigenous oil companies has come out strongly to invest in drilling, re-entries, and new wells.

On gas production increase, Okonkwo stated that if the company achieves the planned production target, such quantity of gas would be enough to generate more than 1.2 gigawatts of electricity, which will contribute substantially to solve Nigeria’s power sector problem especially unstable electricity supply and frequent blackouts.

On the downstream arm of the company, Okonkwo said the company has the largest installed storage capacity for petroleum products in West Africa, which is over 230million litres.

Meanwhile, the company is looking at investing about N1 billion in education, health and security for its host communities in Bayelsa State. Besides several other things, the company provides power, for the communities. Okonkwo said the company plans to build 24 hours uninterrupted power in the coming years for the people.

“Our host communities are very important to us and at this point I like to give it to the communities of Nembe who are hosting majority of our production and they have been supportive in Aiteo’s goal to achieve its objectives,” Okonkwo stated