Ajaokuta, Aladja Steel, others to work in 4 years – Rep 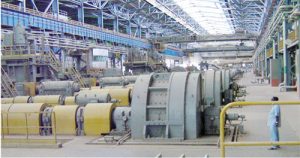 Abuja — The long troubled Ajaokuta Steel in Kogi State will commence operation within the next four years, the chairman, House of Representatives Committee on Steel Development, Abdullahi Halims, has assured.

Halims also said other state-owned steel companies in the country, including the Aladja Steel company, near Warri, Delta State, and the Katsina Steel Company will bounce back to life within the same time.

He disclosed this to journalists in Abuja, saying: “At the end of four years, I want to tell you by the grace of God, we will see the Ajaokuta Steel Company working very well. We will see the Aladja Steel Rolling Mills, we will see the Katsina Steel rolling out mills and the entire steel sector making gains out of production.”

Lamenting that the steel companies had gone under despite being established to drive the nation’s industrialisation, he said outdated laws was one of the major factors militating against the development of the steel sector.

Halims said some advantages in having the industry up and running were that it would enable job creation, bring revenue to the federal government, boost the economy and guarantee economic growth for future generations.

While Ajaokuta Steel Company is planned to produce high end products, including flat sheets, it will also produce billets, the raw material required by Aladja Steel and the rolling mills for the production of finished products – wires and rods.

Ajaokuta, in addition, will produce parts for industrial machines as well as wires and rods from its finished products section.

But, the construction of the plant, which began in the early 1980s, became enmeshed in politics with successive governments in the country making pledges about its completion that were never kept.

Attempts to hand over the company to private hands have not worked as the government ended up retrieving the company from such hands due to failure of the investors to get the plant running.