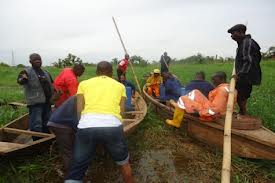 19 January 2012, Sweetcrude, Abeokuta – The Nigerian Security and Civil Defence Corps, NSCDC, thursday, launched ‘Operation Flush Out Vandals’ with the construction of its operations base at the creek on the terrain used as access road by vandals to the Nigerian National Petroleum Corporation’s pipeline in Arepo, Ogun State.

Commandant General, CG, of NSCDC, Dr. Ade Abolurin, who led a delegation of his officials to the ground breaking ceremony of the base, gave vandals a three-day ultimatum to quit the area, threatening total war with them.

Represented by his deputy in charge of operations, Evans Ewurum, the CG said, at completion, the post would be fortified with armed personnel from anti-vandals squads from Lagos and Ogun commands.

He said they were ready to combat the menace of pipeline vandalism, which according to him, had brought untold hardship to the generality of Nigerians by creating artificial scarcity.