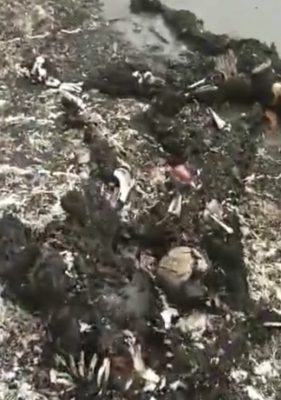 *Charred remains of some victims

Port Harcourt — An explosion at an illegal artisanal oil refining site in Abacheke community, Ohaji/Egbema, a boundary town between Rivers and Imo State has left more than one hundred people burnt to death and cars, motorcycles and the surrounding flora damaged beyond recognition.

Among those who died in the tragedy were the illegal oil refining operators, buyers of their products, transporters and villagers who mill around to provide catering services.

The incident, our correspondent gathered, happened around 11pm on Friday night and lasted till the early hours of Saturday, as residents of the area woke up to see the huge flame from Abacheke forest.

Speaking while inspecting the scene of the incident, the Imo State Commissioner for Petroleum Resources, Goodluck Opiah, regretted that the fire consumed the lives of so many youths.

Opiah disclosed that the owner of the illegal refinery, identified as Okenze Onyewoke had been declared wanted by the government of Imo State.

“At the moment, I can’t really confirm the number of the deceased because many family members have removed the corpses of so many others.

“Apart from this calamity, the act has destroyed the aquatic life of the community. Our people before now are predominantly farmers and fishermen.

“Look around, you’ll find smoke coming from this illegal act. If this is not enough for any person to stop, I think the community is heading for what I can’t describe.

“Most of the people who are engaging in this act are from Rivers, Bayelsa and other neigbouring States and it is sabotage for our people to allow this illegal act to continue.

“I wish to appeal to our youths to desist from making themselves available for this illegal act. This is a suicidal business they got themselves into.”

Meanwhile, the Chairman of Ogba/Egbema/Ndoni Local government area in Rivers State, Hon. Vincent Job, has commiserated with the families of the Egbema victims of the fire incident at Abacheke, Egbema Imo state.

A statement released by the Chief Press Secretary of the Council, Mr Ndu Ajie, Job condemned the activities of illegal refiners and expressed condolences to the families of the victims.

He warned youths to desist from illegal oil refining activities or any nefarious activities capable of truncating their future and channel their energies towards meaningful ventures.

According to the statement, though the incident happened in Abacheke, Egbema, Imo State, it also affects the people of Ogba/Egbema/Ndoni Local Government Area of Rivers State, as they are close neighbours.