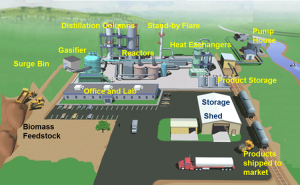 *Commercial mockup of a biofuel plant.

3 December 2018, News Wires — Finnish biofuel producer and oil refiner Neste said on Wednesday it will boost its biofuel production capacity in Singapore with a bigger-than-expected investment of 1.4 billion euros ($1.6 billion).

Neste, 44.75 percent owned by the state of Finland, has in recent years emerged as one of the leading players in the renewable diesel market thanks to its global sales and wide range of feedstock including waste and residues like animal fats.

“The decision is based on a growing global market demand for low-carbon solutions in transport and cities, aviation, polymers and chemicals,” Neste said in a statement.

“The investment will strengthen our competitive advantages which are based on the global optimization of our production and waste and residue raw material usage.”

Neste currently makes biofuels in Singapore, Rotterdam and Porvoo, Finland, and it also does conventional oil refining in Finland. The new production line is due to start in 2022.