Lagos — China is expected to lead Asia’s refinery fluid catalytic cracking units’ (FCCU) capacity growth, with about 89% of the region’s total capacity growth by 2024. China is likely to add more than 480 thousand barrels per day (mbd) of FCCU capacity by 2024, says GlobalData, a leading data and analytics company.

GlobalData’s report,‘ Global Refinery Fluid Catalytic Cracking Units (FCCU) Outlook to 2024 – Capacity and Capital Expenditure Outlook with Details of All Operating and Planned Fluid Catalytic Cracking Units’, reveals that Asia’s FCCU capacity is expected to increase by 542 mbd from 8,385 mbd in 2020 to about 8,927 mbd in 2024. Out of the Asia’s total capacity additions, 151.2 mbd is likely to come from the expansion of active projects while the remaining 391 mbd is expected to come from new-build planned projects. 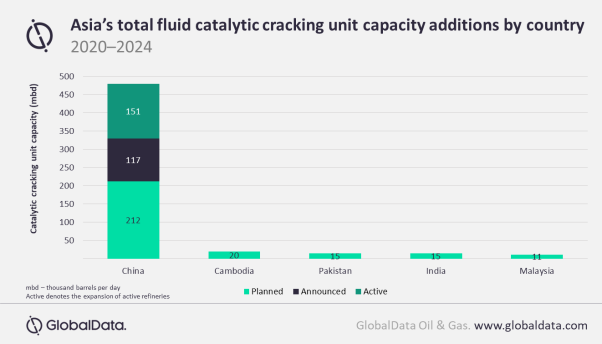 Haseeb Ahmed, Oil and Gas Analyst at GlobalData, comments: “Out of the China’s total FCCU capacity additions of 481 mbd by 2024, 151.2 mbd is likely to come from active expansion projectsy, whereas the rest of the 329.3 mbd is expected to be contributed by new-build projects by 2024. Among the refineries in China, Yulong, Panjin II and Dayushan Island are the major refineries with FCCU, accounting for most of the capacity additions in the country with a combined total of 369 mbd by 2024.”

GlobalData expects India, Cambodia, Pakistan and Malaysia to account for the remaining 61 mbd of FCCU capacity additions in Asia by 2024. These countries together are expected to contribute about 11% of Asia’s FCCU capacity growth, with FCCU of the Kampong Som refinery (Combodia) accounting for most of the capacity additions with 20 mbd, followed by Bongaigaon and Khyber-Pakhtunkhwa I with 15 mbd each.