Lagos — A major crisis was yesterday averted at the Lagos ports, as members of the Lagos State Park and Garage Committee invaded the port’s access roads, dislodging members of truckers’ unions and selling tickets to truck drivers at the second gate of the Tin-Can Island Port in Apapa.

A visit to the port by our Correspondent, showed that members of the Mr. Musiliu Akinsanya- led Lagos State Park and Garage Committee came into port as early as 9 am with about 200 members, alongside policemen from the Rapid Response Squad, RRS. 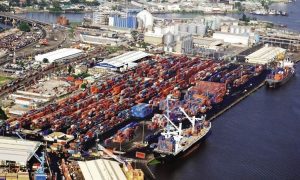 They chased other touts that have been collecting tolls at the ports and began to issue tickets at N4,000.

As the crisis brewed, it was gathered that the Port Police Commissioner, Mr. Taiwo Adeleke who was alerted, called on the attention of the Lagos State Police Commissioner of Police, Mr. Sylvester Alabi and Head of RRS to ascertain if they were aware of the presence of the Park and Garage Committee in the port.

Vanguard gathered that the duo said they were oblivious of the visit, a development that made Adeleke to visit the scene. Immediately members of the Park and Garage with their Police escort sighted CP Adeleke, they took to their heels.

Information at Vanguard disposal revealed that the Park and Garage Committee had been collected tolls for about two hours before arrival of CP Adeleke.

Reacting to the development, an official of MOB Resources Limited, operators of MOB Truck Park who refused to have his name in print, explained that the gate of the park had to be shut to prevent the clash from escalating into the facility.

He said: “MOB Tin-Can is currently closing its gate as there is a serious brawl between rival gangs. Once things normalize, we can open our gate. This is to secure lives and property within our premises.”

A truck owner who simply identified himself as Michael, said, “It is unfortunate that a city which prides itself as a mega city would allow such nonsense to happen”.