on: September 11, 2019In: Community Development

The CSOs represented by the International Society for Social Justice and Human Rights, Justice Advocates du Internationale and Electorate Rights Defence and Education Network, have called on the Federal Government to revoke the OML 25 operatorship license of SPDC to an indigenous oil firm, Belemaoil Producing Limited.

Chancellor, International Society for Social Justice and Human Rights, Dr. Jackson Omenazu, during a world press conference in Port Harcourt, said SPDC has the pedigree of operating in communities for decades with no concern for the development, as was the case of Ogoniland.

Omenazu, accused Governor Wike of failing to protect the socio-economic interest of the people, who elected him as the chief security officer of the state.

“As it were, and coming to terms with all manner of reasonableness, we are hereby calling for immediate resignation of the incumbent Governor of Rivers State, Chief Barrister Nyesom Wike, for failing to secure the interest, and protect the lives, interest, integrity of the good people of Rivers State, who faithfully, trustfully and truthfully elected him to that highly exalted office. 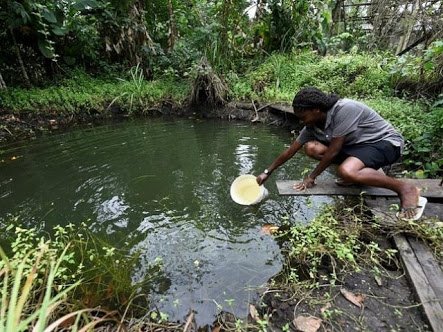 *Source of drinking water in Belema host community of OML 25.

“The spice in the menu of the oath of office and oath of allegiance is lost when a governor abdicates from his sole duty of protecting the socio-economic interest of the governed.”

The group also said the Nigerian Oil and Gas Industry Content Development Act, 2010, was enacted to cushion the adverse effect of the self-centre operators in the oil and gas industry and also create opportunities for interested indigenous entrepreneurs in the oil and gas sector.

Omenazu said Belemaoil Producing Limited, as an indigenous firm should be given first consideration on OML25 before foreign firms, as it is done in other parts of the world, in line with the demands of the protesting women of the host communities.

“We understand very well, and strongly believe that import of Section 3, of the NOGICD Act 2010, was never enacted in error, but meant to deliver the dividends and benefits, as it were, unto the good people, by giving first consideration to the indigenes.

“The actions and representations of the Kula/Belema women, and their teaming supporters are well-founded, and very much in tune with needs of the moment and therefore needs immediate attention by requisite stakeholders in Nigerian nationhood.

“Their angling and choice of Belemaoil Producing Limited and a much better alternative to SPDC is also well-found, knowing that Belemaoil is an indigenous oil and gas operator with reasoned experience and in good standing with the good people of the communities, with environment-friendly policies, and should be given first consideration or right of first refusal.

“The most worrisome of all these fear is the direct and tacit demonstrable manner the incumbent government of Rivers State, has forged ahead, and with vivid and clarified manner, openly provided additional, re-enforced security networks to SPDC against the wailing women.”

Asked if the group is being sponsored by Belemaoil on this agitation, Dr. Omenazu Jackson, said “As a civil rights advocate, I don’t need to know who Belemaoil is before speaking up for the environment and the people.

“It is man inhumanity to man for the Rivers State Government to keep quiet over the issues in OML 25 host communities. The governor ought to have been on the side of the people, but for taking sides against the people and for Shell, he has lost the goodwill to remain the governor of Rivers State.

“Federal Government should revoke the licence of SPDC on OML 25, it was given in error and not in good fate. Rivers State Government should be responsible to the people of Rivers State, Governor Wike has the duty to protect their socio-economic well being of every community in this state.

“I want to see a situation where the governor goes to the community and identify with the women and see how to solve the problem. We expect the governor to be on the side of the people, we are ready to back him to resist the Federal Government’s renewal of that licence for SPDC.

“We expect that by now, the Attorney-General of Rivers State will be in court to challenge the Federal Government over the renewal of OML 25 operatorship licence for SPDC.”