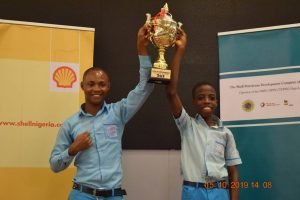 Land hub is the term used by SPDC to categorised its onshore assets covering land areas, as the company has operations on land, swamp, shallow offshore and deep offshore.

Prizes for each competitor include laptops, tablet Pcs, school bags, water bottles, while desktop computers and a cartons of books were given to each participating schools.

Speaking at the event, SPDC General Manager, External Relations, Mr Igo Weli, said this was the fourth SPDC-JV environment quiz competition and the focus was on public secondary schools because that is where the attention (awareness on environment) was needed most.

Weli said the quiz competition on environment was imperative, because it is about making the young ones to be conscious of the environment, as it remains the biggest legacy that can be left to the children.

“The is the fourth SPDC-JV environment quiz competition for our host communities in Imo, Abia and Rivers States. This is really important to us because it is about the future. The focus is on our younger ones, who are the future of tomorrow.

“But if we want to be truthful to ourselves, we have not done a good job of taking care of the environment. We are raising that awareness so that people can be aware of climate change, global warming and how bush burning is a problem to us.

“For an instance, the soot, which has been with us for so long in Rivers State; people should be able to see that activities of illegal refiners are a major problem. When we are complaining, we should be able to know where to direct out complaints and how to focus our mind in term of resolving the issue.

“The focus is on public schools because we believe that that is where the attention is needed. We do some assessment to select the finalists and then test them. I believe in one thing; in terms of the quality of the Nigerian human capital, there is no doubt that we have quality human capital, even at levels you cannot believe.

Also, the General Manager, Safety and Environment, Shell Companies in Nigeria, Mrs Chidube Nene-Anochie, said the competition was about sending the right message about the environment to the young ones, as well as inculcating the habit of environmental consciousness.

“Catching them young and sending the right message. Letting the children know what can impact negatively on the environment. Increase the awareness in the local communities, especially how these negatively affects the environment.”

For their part, the winners for CSS Aleto-Eleme, Master Okpanachi Joshua and Master Ekeh Godswill, who were full of excitement, applauded SPDC for selecting public schools in the competition.

“I am so happy, as you can see I am full of energy. I say thank you to SPDC for organising this quiz competition, may God bless them.

“Last year, my school (CSS Aleto-Eleme) was here and we took second position and this year, we emerged the winners, I am so happy,” Joshua said.