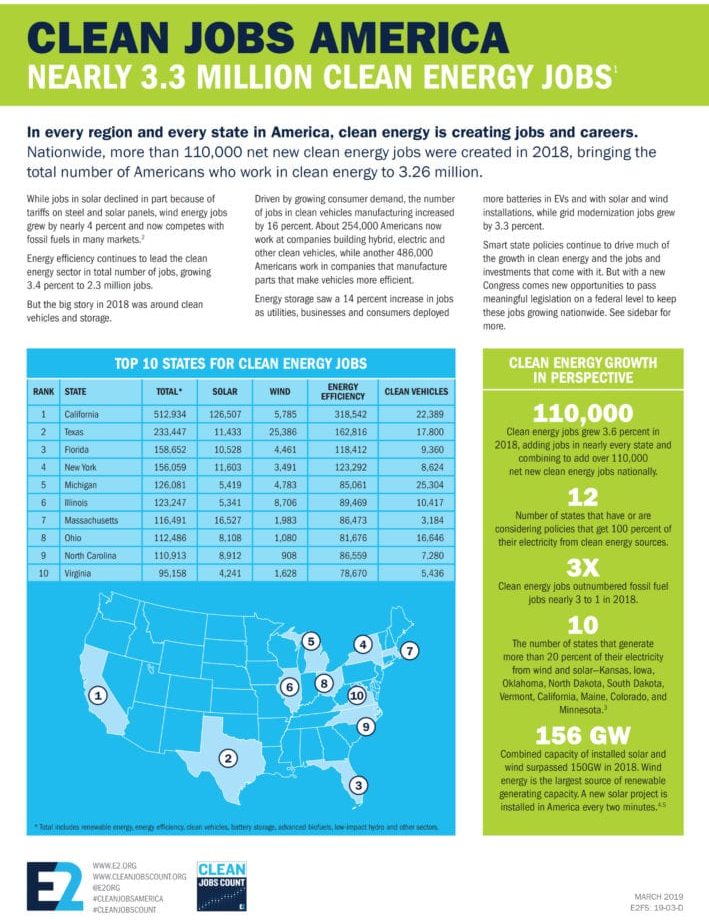 “While politicians argue over the direction of our energy transition, the economic benefits of improving energy efficiency continue to unite America’s business and environmental interests,” said Pat Stanton, Director of Policy at E4TheFuture. “Not only is expanding America’s energy efficiency key to solving multiple climate policy goals, it is now integral to businesses’ expansion plans – saving money and creating local jobs that cannot be outsourced.”

Efficiency businesses added 76,000 net new jobs in 2018, accounting for half of all net jobs added by America’s energy sector (151,700). The sector also employed twice the number of workers in 2018 as all fossil fuel industries combined (1.18 million). There are now more than 360,000 energy efficiency businesses operating across the U.S.

“We all know energy efficiency saves consumers and businesses money with every month’s power bill,” said Bob Keefe, executive director of E2. “We should also remember that energy efficiency is creating jobs and driving economic growth in every state – and doing so while also helping our environment, not hurting it.”

Energy efficiency jobs include positions in manufacturing, such as building ENERGY STAR® appliances, efficient windows and doors and LED lighting systems. They include jobs in construction – retrofitting buildings, offices and schools to make them more efficient. Efficiency careers are found in high-tech design and software and professional services, as well as at the heating, ventilation and air conditioning (HVAC) companies that upgrade outdated inefficient HVAC systems, boilers, ductwork and other equipment.

“State energy officials understand that energy efficiency and the jobs that come with it is an integral and important part of the overall economy,” said David Terry, Executive Director at NASEO, which provides research support for the underlying data behind Energy Efficiency Jobs in America. “Policymakers at the state and federal levels will hopefully keep the size and reach of energy efficiency employment in mind as they plan for the future.”

Ahead of Energy Efficiency Day 2019 on October 2, E2 and E4TheFuture will host an online panel discussion on Energy Efficiency Jobs in America 2019 featuring Keefe, Stanton, and the authors of the report from BW Research Partnership. To register and attend the free event on October 1, click here.

Energy Efficiency Jobs in America follows E2’s Clean Jobs America analysis, which found that clean energy jobs account for nearly 3.3 million jobs across all 50 states and the District of Columbia.

Both reports expand on data from the 2019 U.S. Energy and Employment Report (USEER) produced by the Energy Futures Initiative (EFI) in partnership with NASEO, using data collected and analyzed by BW Research Partnership.

The report was released in March, and is available at www.usenergyjobs.org. E2 and E4TheFuture were both partners on the USEER, the fourth installment of the energy survey first released by the Department of Energy in 2016 and subsequently abandoned under the Trump administration.