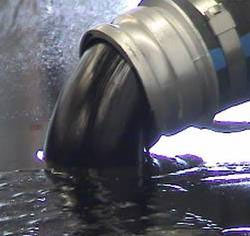 04 December 2012, Sweetcrude, Houston – Oil exploration and production activities have soared in Africa since the discoveries of oil in Oloibiri –Nigeria in 1956, Libya in 1959 and the first discovery in Angola in 1956 which became more operational after the massive find in offshore Cabinda in 1960’s.

Africa place as a significant producer and net exporter of oil in the world, currently supplying about 9% of the total world oil is forecast to grow to about 15% of the world oil supply in 2020 due to new discoveries in the continent especially in West Africa and East Africa.

Since the huge discovery in Ghana’s Jubilee field by Tullow Oil and her partners, increased investments and presence of international oil companies working with national oil companies have triggered E&P in Africa leading to the opening of what is now known as new frontiers in Sierra Leone, Liberia, Kenya, Uganda, Tanzania, Mozambique, Somalia, South Africa, Namibia, etc.

Now, it seems that every six months there is a likelihood of new oil and gas discoveries to be made in Africa. This has buttressed the projection from various market analysts that daily production of oil in Africa will increase tremendously by 2020 and this will trump its economy especially that of Sub-Saharan African nation.

BP Statistical Energy Survey for 2012, shows that Africa had 132.438 billion barrels of oil at the end of 2011 and produced a daily average of about 8804.4 thousand barrels of crude oil per day. The same survey showed that Africa is endowed with proven gas reserves of about 14.53 Trillion Cubic Meter and a daily production of 202.65 billion cubic meters as at the end of 2011.

There is a growing interest by various governments of Africa to accelerate oil and gas exploration in their countries as oil and gas have become major revenue earner for producing nations.

In order to attract foreign investments and serious players with strong technical and commercial capabilities, these governments are strongly showcasing the potentials of their countries as viable places for serious investments.

National oil companies have heightened their quest to share information with investors and updates on exploration and production works so far done and projecting government pathways for harmonious economic development.

Gambia is one of the sub-Saharan African nations where initial surveys indicate presence of hydrocarbons. To share with the global oil and gas industry the extent of work done so far to materialize the nation’s dream as an oil and gas producing nation, Fafa Sanyang, the nation’s commissioner of petroleum will be presenting an interesting paper on “The Gambia Exploration Opportunities and Status of E&P” in the upcoming 6th Annual Sub-Saharan Africa Oil and Gas Conference scheduled for April 25 -26, 2013 at the Marriott West Loop in Houston, Texas, USA.

In the same vein the duo of Al Houyseynou Wane, the exploration advisor of Petrosen (Senegal) and Joseph Medou, the promotion director of the same national company, will be presenting the opportunities and potentials of the Senegal Basin to the targeted audience.

The expansions in E&P and the need to optimize resources and ensure adequate revenue has made drilling and project management a core focus in the industry. In order to maximize investments, exploration and production – drilling which has become the heart-and- soul of petroleum activities must be given critical attention.

Steve Speegle, the Vice President of International Business Development of Applied Drilling Technology (Transocean), will shed light the company’s agenda on international drilling and turnkey in Africa in a keynote presentation that will be part of the day – one activities at the 6th annual sub-Saharan Africa oil conference.

ADTI has successfully delivered turnkey and project management services for more than 2,300 offshore wells in a period spaning over 33 years, while serving the Gulf of Mexico, North Sea and various West African areas.

With a commitment to expand its offshore services in Africa, ADT I, according to Steve Speegle believes that turnkey is a business decision as much as a drilling decision.