New York — North American liquefied natural gas (LNG) developers and producers this year have struck deals to sell 48 million tonnes of LNG, which will eventually pump-up exports 60% from current levels, although much of the output remains years away.

LNG demand is soaring as the conflict in Ukraine pushes global prices to their highest in at least 14 years. Buyers in Europe have looked West in a move away from Russian gas, and Chinese buyers are striking long-term deals after a pause. 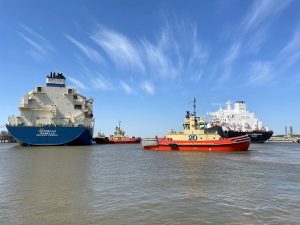 New gas-export plants are being developed across the United States, and Mexico and Canada are poised to join as significant gas exporters, with plants proposed for their west coasts.

Eight North American LNG export terminals are under construction and over a dozen more could receive financial greenlights by 2023. Some buyers have locked in supplies from plants that have not yet been approved for construction, so not every supply agreement may go ahead.

“The dynamics have shifted,” said Charlie Riedl, executive director for trade group Center for Liquefied Natural Gas. “Buyers are trying to lock up firm agreements where they can (to) guarantee that gas is going to be delivered,” he said.

This week, European gas prices hit $84 per million British thermal units (mmBtu) and U.S. gas futures on Tuesday topped $10 per mmBtu for the first time since 2008.

‘LONG-TERM ROLE’
Goldman Sachs forecasts global LNG demand to rise about 12% 424 MTPA next year and expects new plants that will supply 156 MTPA to be approved within the next five years.

Growing demand has made the United States this year’s largest LNG exporting nation during the first six months. Approved projects that are expected to begin shipments between 2023-2026 could keep the country in first place.

“It is important for the United States to supply the market to support allies in Europe and Asia and improve the ability of the developing world to access gas,” said Mike Sabel, Venture Global LNG’s chief executive. His firm has entered into agreements to sell 18.5 MTPA of LNG since last September.

Due to the lack of available capacity, some recent deals have involved facilities whose construction have not yet received financial approvals. Those agreements “reinforce our conviction in the long-term role” for LNG in global energy markets, said Tim Wyatt, a Cheniere senior vice president.

But rising demand has led to construction of three new U.S. export projects and several more could be approved in 2023.

“The global energy crisis has been years in the making due to significant underinvestment,” said Octavio Simoes, CEO of Tellurian (TELL.A), which recently started construction on its long-delayed plant in Louisiana.

The United States, with vast reserves of shale gas, is on track to produce a record 85 MTPA of LNG this year, according to U.S. government projections.

There are four export plants under construction in the United States that will boost the nation’s capacity to produce LNG from 104.6 MTPA now to 156.3 MTPA in 2026.

In addition, two export plants are under construction in Canada and two in Mexico that will add another 20.8 MTPA to North America’s LNG production once all of the facilities enter service by 2027.