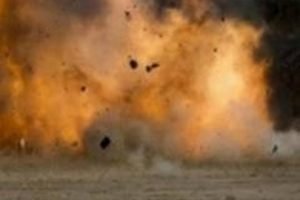 Port Harcourt — Not less than five suspected illegal oil refiners were burnt to death on Friday following a fire explosion at an illegal refining site in Rumuekpe, Emohua Local Government Area of Rivers State.
Our correspondent gathered that the incident occurred when one of the pots used in cooking crude oil at the site exploded and caused fire without any prior sign.
The site in Rumuekpe where the incident occurred is one of the hundreds of illegal refineries dotting the Niger Delta. The make-shift refineries are popularly referred to as Kpofire in the region.
Confirming the development, commander of the local vigilante group in Rumuekpe community, Frank Nwazimutor, said at least five persons have been confirmed dead while over 20 others sustained various degrees of burns.
Nwazimutor explained that four of the victims were members of Rumuekpe community while others were not indigenes of the community and were yet to be identified.
He, however, attributed the ugly incident to lack of employment and empowerment opportunities for the people by the government and the oil companies operating in Rumuekpe.
“The fire outbreak was caused by the kpofire business that they do. There was a fire outbreak that caused loss of lives. It is not true that up to 20 persons have died. 22 persons were burnt but the dead body we have counted now is five,” the vigilante group commander said.
He added: “Some are from our community and others are outsiders, others we cannot identify who were caught up in the fire.  That is where the problem lies right now.
“The community is not too tense, rather, where the pressure is, is in the forest where the bunkering business is going on. Inside the community, it is calm.”
Rumuekpe community is part of OML 58 host communities hosting TotalEnergies/NNPC Joint Venture.
The community also plays host to several oil and gas pipelines, flow station, oil wells and other facilities operated by the Shell Petroleum Development Company of Nigeria Limited, Nigerian Agip Oil Company and the Nigeria LNG Limited, among others.