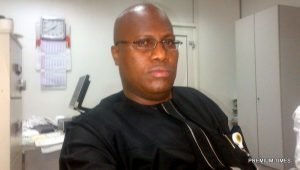 26 April 2018, Sweetcrude, Lagos — The President of the Petroleum and Natural Gas Senior Staff Association of Nigeria, PENGASSAN, Mr. Francis Johnson, has refused to comment on the crisis between its members working with Addax Petroleum and the company’s management.

Adaxx senior workers began a strike last week over some “unresolved issues” which led the management to allegedly issue a ‘no work no pay’ threat to the striking staff members.

SweetcrudeReports put calls across and sent text messages to Mr. Johnson’s phone number, seeking PENGASSAN’s position on the ‘no work no pay’ threat from Addax management and the situation with the going negotiation between the association and company management at resolving the crisis.

The calls and text messages, however, received no response from Mr. Johnson as at the time of publication.

An online publication, Premium Times, quoting the general secretary of the association in Addax Petroleum, Gerald Agwu, had said some top officers of the association, who are workers of Addax, were on Friday warned through personalised letters to go back to work or risk losing their salaries for the corresponding period of the strike.

But, Addax spokesperson, Mr. Kingsley Onoyom, had told SweetcrudeReports that he was not aware of such threat letters and that the company management was working at resolving the differences with the workers.

“I am not aware of any such letter. Our previous statement still stands. Management is engaging the union in a bid to resolve the issues,” he said in a note to SweetcrudeReports.