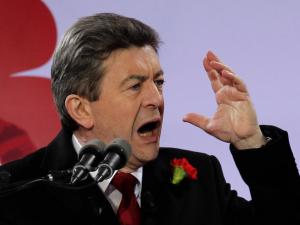 Melenchon, whose surge in support to challenge for third place has been the main surprise in the campaign, hailed “citizens’ revolutions” led by Latin American leaders such as Venezuelan president Hugo Chavez and Argentine president Cristina Fernandez, who this week announced a plan to seize control of YPF from Spain’s Repsol, igniting a chorus of international criticism.

“The revolutions in Latin America are a source of inspiration for us,” Melenchon said at the meeting with foreign media staged at his headquarters in a disused factory in Paris’s eastern suburbs.

“The nationalisation of YPF is proof that the citizens’ revolution is still active. If we win power, we would nationalise Total in exactly the same way,” he said, beneath red campaign posters inviting French voters to “Take power!”

Melenchon is running fourth in the polls ahead of Sunday’s ballot, slightly behind far-right candidate Marine Le Pen. While he is well short of joining the two-horse runoff, he has shaken up the campaign with his fiery oratory and ability to mobilise big crowds nostalgic for the barricades.

The 60-year-old former teacher’s poll surge in recent months has tapped into a popular frustration at the highest jobless rate in 12 years and economic stagnation.

Melenchon has made it plain he will back the Socialist candidate Hollande after the first round but has stopped short of stating what conditions he might seek.

“We will do everything in our power to make Mr. Sarkozy lose,” he said, saying that would set an example for other countries in Europe, notably Germany, where conservative Chancellor Angela Merkel faces elections in October next year.