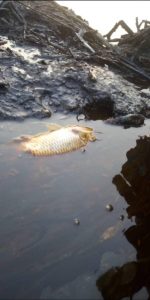 Port Harcourt — Fresh oil spills from the Tebidaba/Brass Agip Trunk Line operated by the Nigerian Agip Oil Company, NAOC, have rocked Lasukugbene community in Southern Ijaw Local Government Area of Bayelsa State, causing serious devastation to the environment.
Lasukugbene, one of the communities settling on the bank of the Southern Ijaw axis of River Nun, is host to the NAOC and Shell Petroleum Development Company of Nigeria Limited; hosting manifolds, pipelines and many oil wells.
The spills, which occurred since February 3, 2022, has been unattended to up till the time of filing this report, even a JIV has not been officially carried out by the relevant authorities.
Speaking on the development, the Paramount Ruler of Lasukugbene, Chief Franel Christain Akenika, said the incident was caused by equipment failure due to obsolete facility, explaining that since  the pipeline was laid in 1974, it has not be replaced by Agip since then.
Akenika said the community was at the verge extinction due to the severe oil spillage which occurred on the Tebidaba/Brass Agip Trunk Line, adding that apart from the swamps and pipeline, crude oil was spreading on the Nun River.
“Agip should come and remove their pipeline from our environment as we cannot continue to have only the negative impacts from their presence in our environment. The community noticed this present oil oil spill on 3rd February, 2022 and duly informed the facility owner, Agip.
“But, instead of coming to the community formally with a view to locate the spill point in the swampy environment, Agip resorted to self-help by going about trying to locate the spill site with the military and, they couldn’t locate the exact spot. This has been their way, avoiding the community and acting as if they own our environment.
“It was just last Saturday, 5th March, 2022 that they were able to locate the actual spill point through the assistance of community folks. I also went with them to the site. They came with swamp buggie and, in the presence of the regulators and military; excavated the spot.
“And it was discovered that the exposed  section of the pipeline was leaking right from under. There was another spill point not far from this excavated spot, but Agip refused to visit that spill point.’’
Also speaking, the Envrionemntal Rights Advocate saidbalthough NOSDRA and Bayelsa State Ministry of Environment officials were present at the site last Saturday, the exercise cannot be described as a JIV, since no document was presented to anyone for signing.
Project Officer and Head Niger Delta Resource Centre, ERA, Mr Alagoa Morris, however said everyone present at the excavated spot saw and agreed that the pipe was leaking from right under the pipe; at 6’O Clock point.
“Also, without repairing the ruptured spot that has been confirmed; Agip suggested that the excavated spot be refilled immediately with the mud from the same spot. This was initially resisted by community representatives, but they later agreed after much pressure from Agip.
“There is need for official pronouncement and documentation as regards the cause of rupture on the Agip Tebidaba/Brass pipeline under reference and hence; the mandatory JIV should be carried out without further delays. NOSDRA and Bayelsa State Ministry of Environment should ensure Agip does the needful and promptly too.
“Lasukugbene and any other impacted community deserves relief materials immediately to alleviate their plight and compensation, especially considering the fact that Agip only mobilized to the site of interest more than month after the incident and; even refused to stop another leaking spot while in the field already within same environment.”