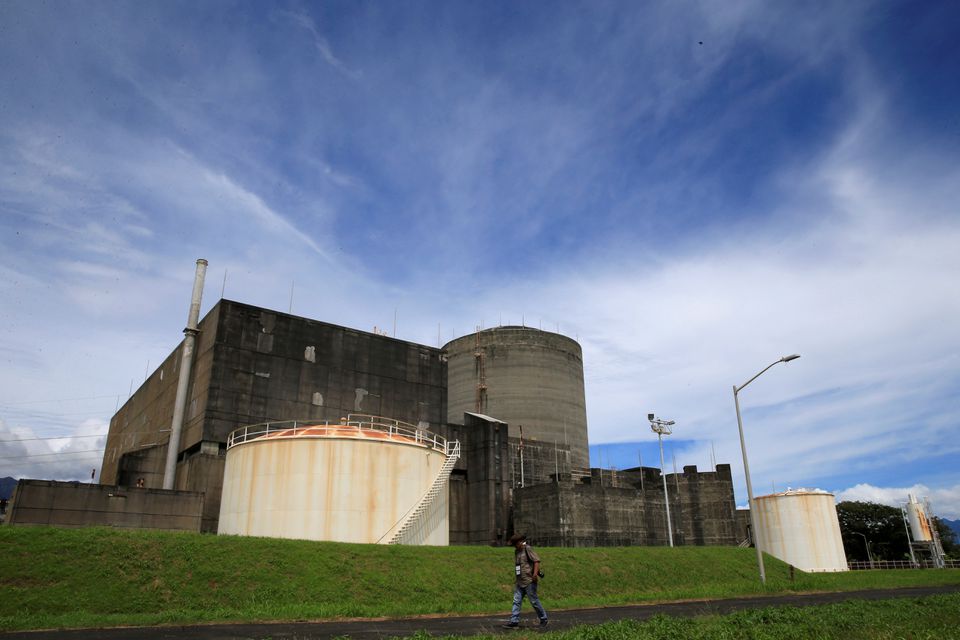 Manila — The Philippines’ Bataan Nuclear Power Plant (BNPP) has not produced any electricity since it was finished in 1984, despite its $2.3 billion price tag and its promise of energy security during the 1970s oil crisis.

Approved by former dictator Ferdinand Marcos Sr., his son and new President Ferdinand Marcos Jr. has revived discussions on proposals to rehabilitate the site amid the current energy crisis that has pushed prices for traditional power generating fuels coal and natural gas to records.

The BNPP’s potential revival is one sign of the renewed interest in nuclear power. Governments across Europe and Asia are extending their aging fleet of nuclear plants, restarting reactors and dusting off plans to resume projects shelved after the 2011 nuclear crisis in Fukushima, Japan.

Both the administration of U.S. President Joe Biden and the International Energy Agency have said nuclear power is critical for countries to meet global net-zero carbon emissions goals and ensuring energy security, as fossil fuel prices have surged after Russia cut natural gas supplies to Europe since the Ukraine war started in February.

As a result, nuclear power may be on the cusp of a revival of the golden age seen after the 1970s oil crisis that led to a flurry of projects, although opposition from politicians and non-governmental organizations, funding issues and safety concerns will have to be overcome.

“If fossil fuel prices remain high for a period of three to four years, I think that would be enough to launch a golden age of nuclear development especially in Asia because that’s where they are the most price sensitive and because there’s most need,” said Alex Whitworth, head of Asia power and renewable research at consultancy Wood Mackenzie.

“About 80% of power demand growth in the next few years is going to be in Asia given the economic deterioration in Europe and the U.S.” 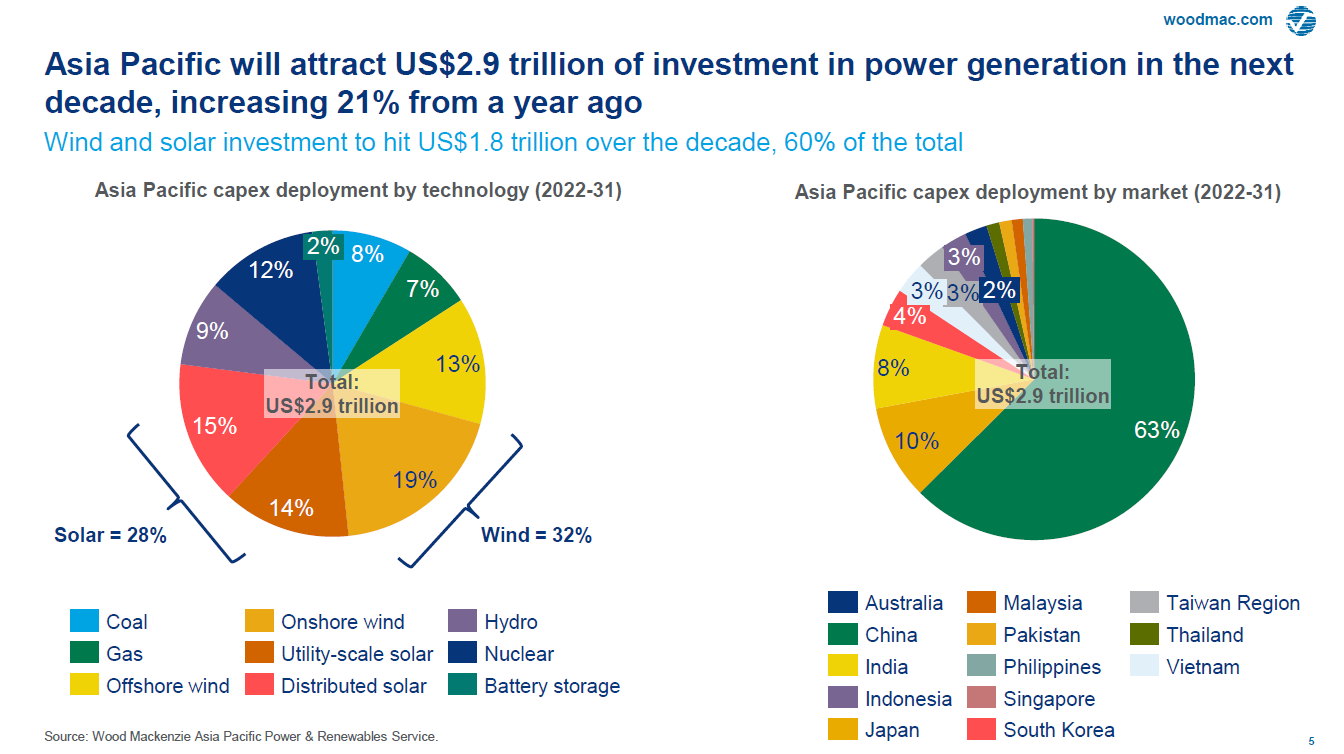 Newly elected leaders of the Philippines, Japan and South Korea, empowered by shifting public opinion because of high energy prices and the need to cut emissions, are pushing ahead plans to restart reactors and build new plants to ease power shortages. Vietnam may also revisit two projects shelved in 2016 because of safety concerns and budget constraints.

In Europe, Britain gave consent in July for what will be its second new nuclear project in two decades. Funding discussions for the Sizewell C project are ongoing and a final investment decision is expected in 2023.

Global nuclear capacity will need to double by 2050 to achieve net-zero targets, the IEA said last month, to power electric vehicles and produce non-fossil fuels such as hydrogen and ammonia to cut heavy industry emissions. 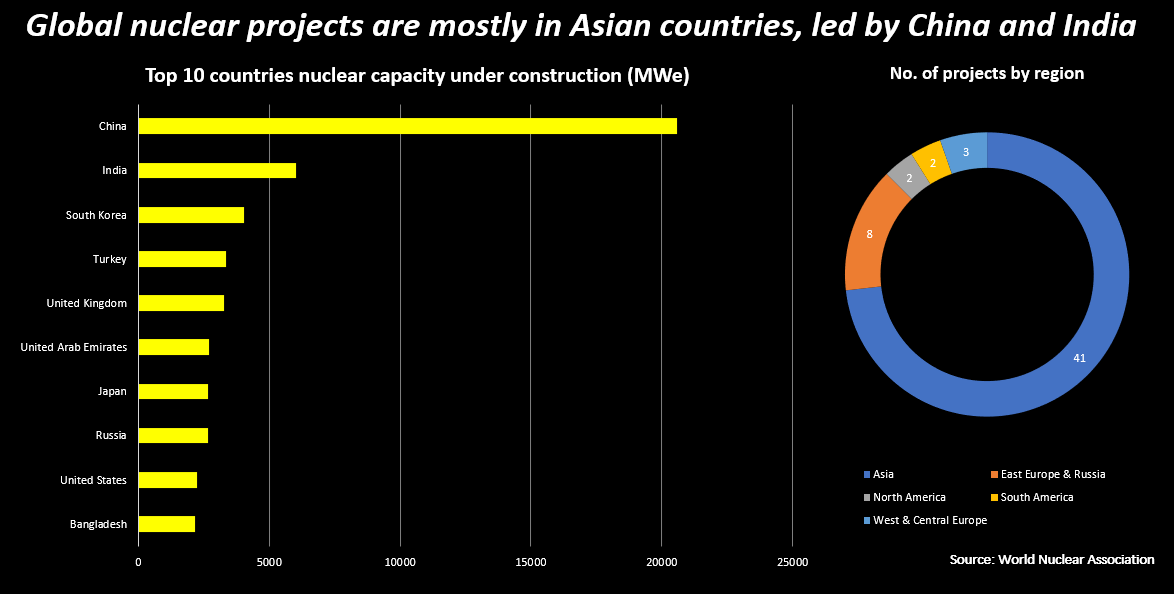 LOWER COST POWER
New technologies such as small modular reactors (SMR), quicker to build and less costly than conventional units, are being discussed in Singapore, the Philippines and Japan, Paul Stein, chairman of Rolls-Royce SMR, a unit of Rolls-Royce (RR.L), said last month.

“The heavily industrialized economies of the Far East are in just as much need, perhaps even more so, of a rapid increase in nuclear power as much as industrialized Europe and United States,” he said in an interview.

The average cost of electricity generated by a conventional nuclear power plant over its lifetime is less than half that of a gas-fired plant at current prices, and is in the same range as coal power, Woodmac’s Whitworth said, spurring governments to revive projects.

Nuclear provides about 5% of Asia Pacific’s power supplies and this is expected to rise to 8% in 2030 based on projects that have been announced, he said.

Chinese and Russian reactor designs dominate the projects under construction since 2017 but sanctions on Moscow following the Ukraine war have raised questions about the prospects for Russian-designed plants. Finland has scrapped plans for a project by Russian state nuclear supplier Rosatom.

Delays and costs overruns from additional safety reviews after Fukushima and the COVID-19 pandemic have plagued projects. The high initial costs of reactors and concerns around waste fuel disposal and overall safety concerns are also impediments, industry experts said.

The budget for French utility EDF’s Hinkley Point C project, under construction in the UK, has spiralled and it will begin generating a decade later than initially promised. EDF has blamed the pandemic for constraining staffing, resources and supply chains.

In the U.S., two reactors at Plant Vogtle in Georgia are slated to open in 2023 after a six-year delay and costs have more than doubled to $30 billion.

Still, as existing U.S. reactors struggle, the Biden administration is implementing a $6 billion program passed last year to help them and is backing additional policies for the sector. A Senate bill announced on July 27 could help build advanced reactors and prevent old plants from closing if passed by Congress.

In Europe, there are only a few nuclear power stations under construction, but France has plans for up to 14 new reactors by 2050.