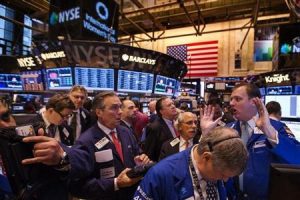 Traders work on the floor at the New York Stock Exchange. REUTERS/Lucas Jackson

02 August 2018, New York — A deepening trade dispute between the United States and China weighed on global stocks and bond yields on Thursday, but a rise in Apple shares took its valuation above $1 trillion (£767 billion), the most for a U.S.-listed company, and helped lift some U.S. indexes.

The tech company’s stock jumped 2.8 percent to as high as $207.05, bringing its gain to about 9 percent since Tuesday when it reported quarterly results that beat expectations and said it bought back $20 billion of its own shares.

The Nasdaq and benchmark S&P indexes had opened lower, but began to turn positive as the advance in Apple shares took the focus away from the trade dispute.

Still, concerns remained over the U.S.-China trade spat, which intensified on Wednesday after U.S. President Donald Trump raised pressure on China by proposing a higher 25 percent tariff on $200 billion worth of Chinese imports.

China on Thursday urged the United States to “calm down,” but market participants remained unnerved.

MSCI’s gauge of stocks across the globe shed 0.75 percent, while the pan-European FTSEurofirst 300 index lost 0.85 percent.

Germany’s blue-chip index DAX, which is seen as a trade war proxy, fell 1.5 percent while the broader pan-European STOXX 600 was down about 0.8 percent.

MSCI’s broadest index of Asia-Pacific shares outside Japan closed 1.6 percent down, dragged down by a 1.8 percent fall in Chinese H-shares.

“We’re in risk-off mode after the back and forth between China and the U.S. on tariffs,” said Priya Misra, head of global rates strategy at TD Securities in New York. “You’re already seeing (trade tension) affect investment decisions globally, so it is a growth concern.”

On Wednesday, the Federal Reserve kept interest rates unchanged as expected, characterizing the U.S. economy as strong and staying on track to increase borrowing costs in September and likely again in December.

Gold prices held steady on the news after falling 11 percent since April to its lowest in a year.

Oil prices strengthened after an industry report suggested U.S. crude stockpiles would soon begin to decline again after a surprise rise in the latest week.