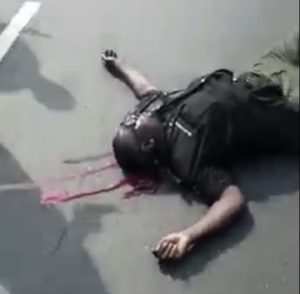 *One of the policemen killed in the line of duty

According to the Police Public Relations Officer in Rivers State, Grace Iringe-Koko, Awosika was kidnapped on the Rumuokoro flyover in Obio/Akpor Local Government Area of the state, after being trailed from Obiri-Ikwerre flyover, by gunmen on military uniform.

Iringe-Koko who disclosed that the gunmen shot sporadically killing three mobile policemen, also added that a full-scale investigation has been launched.

“At about 1650hrs vehicles conveying a staff of IGPES Oil and Gas Group on 24/11/22, along Obirikwerre flyover a green Sienna vehicle was flashing them light to stop but they refused. Later, the Managing Director Mr. Seni Awosika, the kidnapped victim, ask the driver to stop the vehicle while the gunmen on military uniform on Rumuokoro flyover opened fire and shot three mobile Police officers. 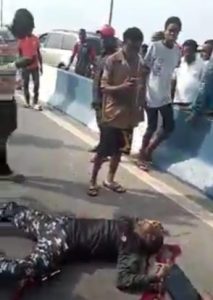 *The second policeman killed in the line of duty during the kidnapping with onlookers busy taking pictures.

“It is very unfortunate. The policemen were providing escort for the oil company workers when the incident happened.

“But we are on it and an investigation has been launched immediately into the incident with a view to apprehend the suspects.”

Meanwhile, eyewitnesses to the incident disclosed that the policemen were in a Toyota Hilux escorting the IGPES boss when the gunmen attacked.

A source disclosed that the dare-devil gunmen blocked the vehicle in which the oil boss was in, and immediately opened fire on the policemen who attempted to stop them from achieving their aim.

With the policemen sprawling on the floor in a pool of their own blood, the gunmen reportedly isolated their target after identifying him, dragged him into their own vehicle and zoomed off. 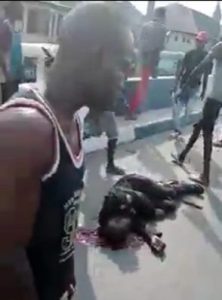 *The third policeman shot by the kidnappers. He was still breathing at the time this photograph was taken but first responders were not on hand to provide any assistance.

The gunshot caused serious panic at the Rumuokoro business area as people scampered for safety.

Within minutes the area was deserted, as the gunmen left unchallenged, while the lifeless remains of the three cops became a spectacle.

They were said to have made away with their principal and left the Toyota Landcruiser and Hilux in the middle of the bridge.

A viral video of the incident which later emerged showed that one of the policemen was still alive and breathing, but onlookers claimed they were too scared to help, for fear of problems with the police.