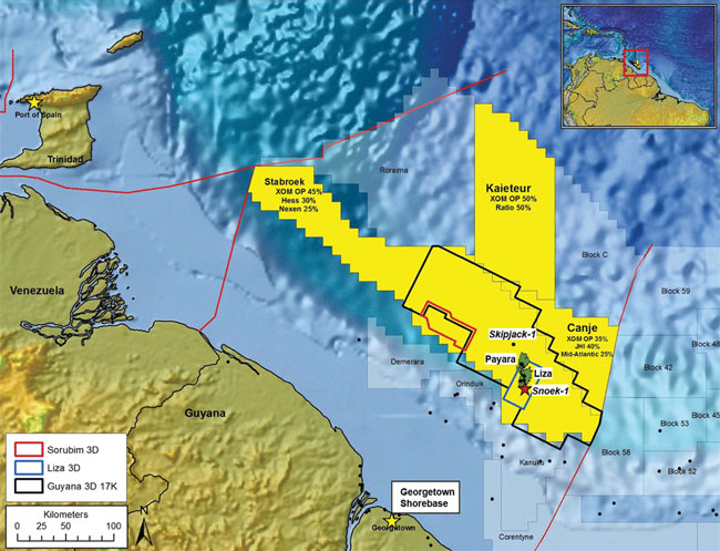 BOGOTA — Control of the world’s fastest-growing economy and its massive offshore oil fields are up for grabs Monday as Guyana votes in national elections.

The business-friendly administration of David Granger is seeking re-election, facing Irfaan Ali of the People’s Progressive Party, who is pledging to renegotiate some oil contracts.

The winners in what is forecast to be a close election will shepherd the remote, jungle-clad nation through a bonanza that the International Monetary Fund says will propel economic growth of 86% this year, the fastest in the world. The offshore deposit, which Exxon Mobil Corp. first successfully drilled in 2015, is so large relative to the population of 780,000 that by the middle of the decade Guyana may overtake Kuwait and become the world’s largest per capita crude producer.

“The oil is flowing, the money is flowing and whoever wins, the day after they take office, they can start spending it,” said Christian Wagner, Americas analyst at Verisk Maplecroft, a risk consultancy.

The winner will lead the 65-seat national assembly for a five-year term, just as production is starting at the offshore fields, which are estimated to hold the equivalent of 8 billion barrels of crude. Energy companies including Hess Corporation, China’s CNOOC Ltd. and Tullow Oil Plc have invested in the country.

For the oil industry, a win for the opposition People’s Progressive Party would test the country’s commitment to contract law. It’s a touchy subject in a country that has been criticized for giving away its resources too cheaply.

“Granger has hand-held companies during this phase of exploration and production,” said Raul Gallegos, a Bogota-based director at Control Risks, an international consulting firm. “In the oil and gas community, companies are naturally nervous about a change.”

A Global Witness report recently criticized Granger’s government for signing an “exceptionally bad” contract with Exxon that deprives the country of $55 billion over the life of the deal. Exxon and Granger disputed the findings.

Some other contracts “are even more lopsided than that of the Exxon contract,” Ali said in a statement in January.

Rather than re-write contracts, in practice an Ali government would probably try to get companies to commit to more social spending and job creation, while also setting stricter terms in future contracts, Wagner said.

Maplecroft estimates that the Ali-led opposition has a 75% chance of winning the presidency.

Heavy Spending. Government revenues are forecast to rise 37-fold to $10 billion a year in a decade, according to Oslo-based research company Rystad Energy.

Given the stakes, whoever loses is likely to contest the result in the courts, Rystad said. Such a challenge would test the institutional strength of a country that’s only had two democratic changes of government in its history.

Both sides have floated plans to create thousands of jobs, spend heavily on education and build out roads and other infrastructure. The country is braced for a rapid transitioning from a relatively poor exporter of sugar, gold and bauxite, into one of South America’s richest countries.

End to Poverty. “Guyanese will never be poor again,” Granger told a crowd early this year launching the campaign for the political alliance, known as the Partnership for National Unity. “That oil wealth belongs to you, and this government will make sure you benefit from this oil wealth.”

Results from the vote, which will determine the make up of the national assembly as well as who controls the presidency, are not likely to be announced for several days as electoral authorities gather ballot boxes from remote settlements. Polls are open from 6 a.m. to 6 p.m. and there’s no run-off.

The world’s best-performing economy borders Venezuela, which is undergoing the world’s deepest slump. Guyana has a long-standing territorial dispute with its neighbor.