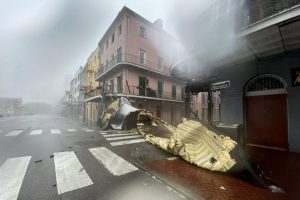 The storm moved into Mississippi on Monday after leaving a trail of destruction in Louisiana and rampaging through U.S. offshore oil and gas fields. Hundreds of oil production platforms were evacuated and more than 1.3 million homes and businesses in Louisiana and Mississippi were without power.

Production losses – including at six Gulf Coast refineries – will lift retail gasoline prices by 5 to 10 cents a gallon, tracking firm GasBuddy said. Crude oil eased on Monday after an earlier rally to a four-week high.

Colonial Pipeline, the largest U.S. fuel pipeline network, halted motor fuel deliveries from Houston to Greensboro, North Carolina. A spokesman on Monday did not say when it expects to resume full operations. Its lines supply nearly half the gasoline used along the U.S. East Coast and an extended May shutdown led to fuel shortages.

Some 1.74 million barrels of oil output were lost to shut-ins on Sunday, an amount greater than Mexico’s daily production. U.S. Gulf of Mexico natural gas also was cut by 94%, or 2 billion cubic feet, a government tally found.

Six refineries that process 1.92 million barrels per day of oil into gasoline and other petroleum products, either shut or curtailed some production, sources familiar with the operations and companies said. That includes two Valero Energy plants in Louisiana that combined process 335,000 barrels per day and Phillips 66’s 255,000 bpd Alliance, Louisiana, refinery.

Oil companies on Monday are beginning damage surveys of offshore platforms before taking crews back and restoring any output. Royal Dutch Shell plans a flyover of its offshore properties.

A transmission tower that provides power to eight southeast Louisiana parishes, which are home to refinery operators, collapsed into the Mississippi River at the height of the storm. It could takes weeks to remove the tower, tying up traffic on the nation’s larger commercial waterway, a regional emergency management director said.

Nearly a dozen commercial shipping ports from New Orleans to Pascagoula, Mississippi, remained closed on Monday. The closures included Louisiana Offshore Oil Port (LOOP), the largest privately-owned crude export and import terminal in the United States. Ida made a landfall near Port Fourchon, the land base for LOOP.