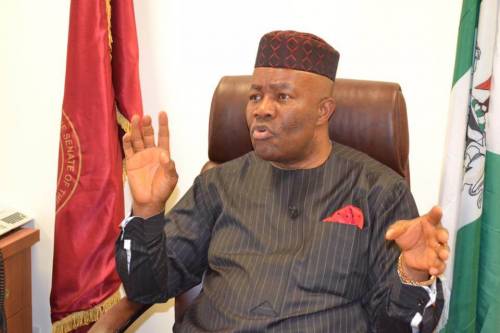 Port Harcourt — The Ijaw Youth Council, IYC worldwide has called for the immediate sack of the Minister of Niger Delta Affairs, Sen, Godswill Akpabio, over what they described as undue interference in the affairs of the Niger Delta Development Commission,NDDC.

This is in reaction to the newly inaugurated three-man NDDC interim management committee led by Mrs. Joy Nunieh as Acting Managing Director, which took over operations of the Commission yesterday in Port Harcourt, as announced by the Minister of Niger Delta Affairs, Sen. Godswill Akpabio.

President of IYC, Eric Omare, alleged that the activities of Sen. Akpabio since his appointment as Minister of Niger Delta Affairs, have led to instability and confusion in the Niger Delta region especially with respect to the management of the NDDC.

Omare recalled that President Buhari On Tuesday, October 29, 2019, forwarded the names of the newly appointed NDDC board members to the Senate for clearance, which the Senate President, Ahmed Lawal, had directed the Senate Committee on NDDC led by Senator Peter Nwaboshi (Delta North) to do the screening within one week.

He wondered why the Minister would on the same day, after few hours, rushed to the television to announced the appointment of a three man NDDC interim management committee to be led Mrs. Joy Gbene Nunieh as Acting Managing Director,

“The IYC completely reject the interim management committee set up by Chief Akpabio because it is not in the interest of the NDDC and the Niger Delta region to set up such a committee when the Senate has begun the screening and promised to complete the exercise within seven days.

“What would the interim management committee achieve for the Niger Delta region within one week period of their stay in office? Why is there so much instability in the NDDC under the Buhari’s presidency, when the North East Development Commission with similar mandate is focused and delivering on its mandate?”

The IYC President also said that the supervision of NDDC should be returned back to the Presidency as it was before now, alleging that the Minister, since assumption of office, has taken several actions in relation to the NDDC that are not for the interest of the region.

“We make bold to state that Akpabio’s intention in setting up an interim management committee with his political loyalists is to use the NDDC to promote personal aggrandizement at the expense of the development of the Niger Delta region.

“The IYC is wondering if Chief Akpabio is Minister of NDDC or the Niger Delta Affairs. Why is Akpabio more interested in the NDDC instead of coordinating the overall development of the Niger Delta region especially the completion of the East Road Road that has been abandoned since President Buhari assumed office?

“We had initially thought that it was the right decision but Akpabio’s conduct so far shows that the NDDC under the Niger Delta Ministry would not be able to achieve its statutory responsibilities. The supervision of the NDDC should be returned back to the Presidency as it was before now.”