on: October 05, 2012In: Community Development, featured 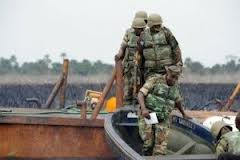 Brig.-Gen.Tukur Buratai, the Commander, Sector II of the task force, disclosed this in an interview in Port Harcourt.

The task force commander, however, did not disclose the quantity of the crude oil impounded by the task force.

Buratai, who is also the Commander, 2 Brigade of the Army in Port Harcourt, said the arrested Ghanaians and Nigerians had been handed over to the Nigeria Security and Civil Defence Corps, NSCDC, for prosecution.

“There were some arrests and they have all been handed over to the civil defence for prosecution.

“And, as you are aware, these barges have been operating within this area. They take advantage of the creeks, the difficult terrain, to sneak into the area and then steal the crude oil.

“But, luck ran out for them, we were able to intercept them.”

He said the difficult terrain had made it difficult for its gunboats to penetrate the creeks because some areas had shallow water.

“But, by and large, we have taken full control and we are able to take on the oil thieves squarely.”