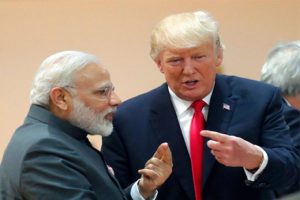 This will be part of wider cooperation between both countries, with Indian Prime Minister Narendra Modi expected to meet U.S. President Donald Trump in Houston this weekend to discuss ways to deepen their energy and trade relationship.

India could increase its trade footprint at a time when the United States and China are in the midst of a tit-for-tat trade war, analysts have said.

Petronet will sign a memorandum of understanding (MOU) with Tellurian on Saturday to invest $2.5 billion for rights of up to 5 million tonnes a year of LNG over the lifespan of the project, two sources familiar with the matter said.

The MOU will be signed at an energy forum in the presence of Modi, one of the sources said, declining to be named as he was not authorised to speak with media.

Indian gas importer Petronet and Tellurian had first signed a broader agreement in February which did not specify investment numbers or offtake volumes.

India is expanding its pipeline network and building new LNG import terminals to encourage the use of cleaner fuel.

Modi has set a target to raise the share of natural gas in India’s overall energy mix to 15% in the next few years from about 6.5%.

Tellurian is offering an equity interest in Driftwood Holdings, which comprises Tellurian’s upstream company, its pipeline and the upcoming terminal that will be able to export 27.6 million tonnes of LNG a year.

A $500 million investment in Driftwood would give the stakeholder rights over one million tonnes a year of LNG over the life of the project, according to a presentation by Tellurian posted on the U.S. company’s website.