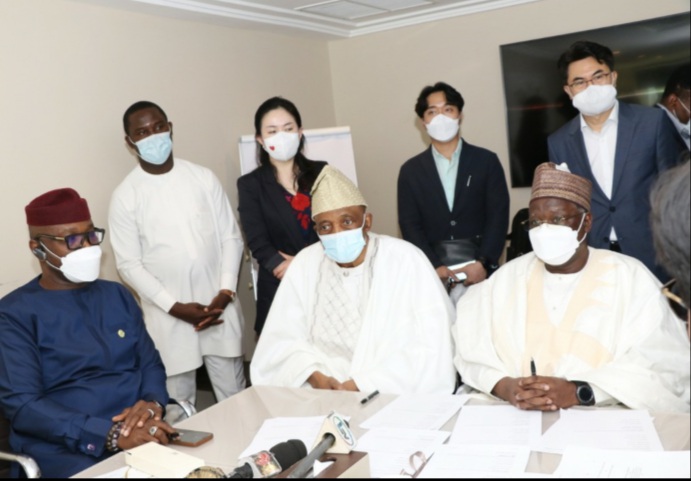 *Resolution of the dispute between Ladol and SHIN presided over by Prof. Ibrahim Gambari, Chief of Staff to President Muhammadu Buhari

Lagos — The dispute between Samsung Heavy Industries Nigeria (SHIN) Limited and LADOL Integrated Logistics Free Zone Enterprise has reaffirmed their partnership, after three years of dispute, this is just about $300billion Foreign Direct Investment, FDI has been packaged for the Nigerian oil and gas and maritime markets

According to both parties, the settlement is expected to increase investment and boost employment in the free trade zone, which before now contributed 560,000 man-hours of training in total. In addition, SHIN has directly employed 2,500 Nigerians and 5,000 indirectly by its suppliers, working in highly specialised skills and roles.

In a joint statement issued in Lagos yesterday, the two companies also reaffirmed the existing shareholding structure in their joint venture, where SHIN owns 70 percent equity while LADOL 30 percent.

They stated that they had resolved the historic and outstanding issues that were the subject of litigation in the Nigerian and international courts.

The joint venture was established when SHIN was awarded the $3.3 billion Egina FPSO project, which required the construction of the fabrication and integration yard to carry out the in-country aspect of the Egina project.

However, the friction between the two, which began in 2018, led to a total breakdown of communications and engagements, resulting in court proceedings in Nigeria and the UK.

In the statement, they thanked the Nigerian and South Korean governments for their assistance and interventions, saying, “This landmark agreement, which demonstrates SHIN’s ongoing commitment to its subsidiary, SHI-MCI, and Nigeria, and LADOL’s commitment to consolidating and continuing the development of LADOL Free Zone to help ensure that Nigeria becomes an African hub for industrialisation, ensures that SHIN and LADOL can work together as shareholders in SHI-MCI.”

They welcomed the settlement agreement, which has been approved by the Nigerian Ports Authority (NPA) and the Nigerian Exports Processing Zones Authority (NEPZA), and would also be registered as the judgment in the High Court in London, and the courts in Nigeria.

According to the statement, “The settlement agreement confirms that the Shareholders’ Agreement between SHIN, SHI-MCI, and MCI FZE Yard Development Limited (MCI), dated July 1, 2014, remains valid, and the current shareholding of SHI-MCI is held in the following proportions: SHIN controls 70 percent and MCI, 30 percent.

Ladi Jadesimi, chairman of LADOL, confirmed that the disagreement between LADOL and Samsung had been laid to rest in the interest of the Nigerian economy.

“This settlement brings to an end the dispute between the LADOL and SHI Groups, which has been lingering for a little while and it became critical that it be sorted out. Now it has been completely resolved. The key thing is that we have been able to come back together peacefully cementing a far stronger joint venture going forward.

“LADOL will continue to invest in and support a range of developments and industries in LADOL Free Zone from agriculture to green energy, ensuring Nigeria becomes a sustainable industrial Hub in Africa,” Jadesimi said.

On his part, Jejin Jeon, managing director of SHIN, disclosed that after many years of legal proceedings that hindered SHIN’s ability to operate in Nigeria and threatened its contribution to the Nigerian economy, the settlement has become a definitive statement in favour of SHI-MCI’s right to operate in the LADOL Free Zone.

“In recognising that Samsung Heavy Industries (Nigeria) lawfully holds 70 percent of the shares in SHI-MCI, the settlement acknowledges our extraordinary contribution to the LADOL Free Zone and its role in the economic development of Nigeria,” Jeon said.

He noted that before the Egina project, most maritime construction for African oil and gas projects took place outside of Africa, stressing that Nigeria did not have the capacity to fabricate and integrate an FPSO locally.

“Thanks to our investment in the SHI-MCI yard, we have established Nigeria as a fabrication and integration hub on the African continent. Over six years, SHIN has trained 600 Nigerians from disadvantaged backgrounds in a comprehensive welding qualification programme, in one of the most advanced welding academies in Nigeria.

Read also: “This has contributed to 560,000 man-hours of training in total. In addition, SHIN has directly employed 2,500 Nigerians with a further 5,000 employed by our suppliers, working in highly specialised skills and roles. This has moved the dial in practical terms – with the local contribution rising from 1 percent to over 25 percent,” he said.

The terms of the settlement also provide that NEPZA, as part of its statutory duties and role as administrator of all NEPZA free zone areas in Nigeria, shall continue to be responsible for the issuance and renewal of SHI-MCI’s Operating Licence.