Dublin, Ireland — Born 1959 in Yola, Adamawa State, Nigeria, the death of Mohammad Sanusi Barkindo, the Secretary-General of the Organisation of Petroleum Exporting Countries (OPEC), few days to his exit from office, has sent shockwaves across the global oil and gas community and Nigeria, in particular. 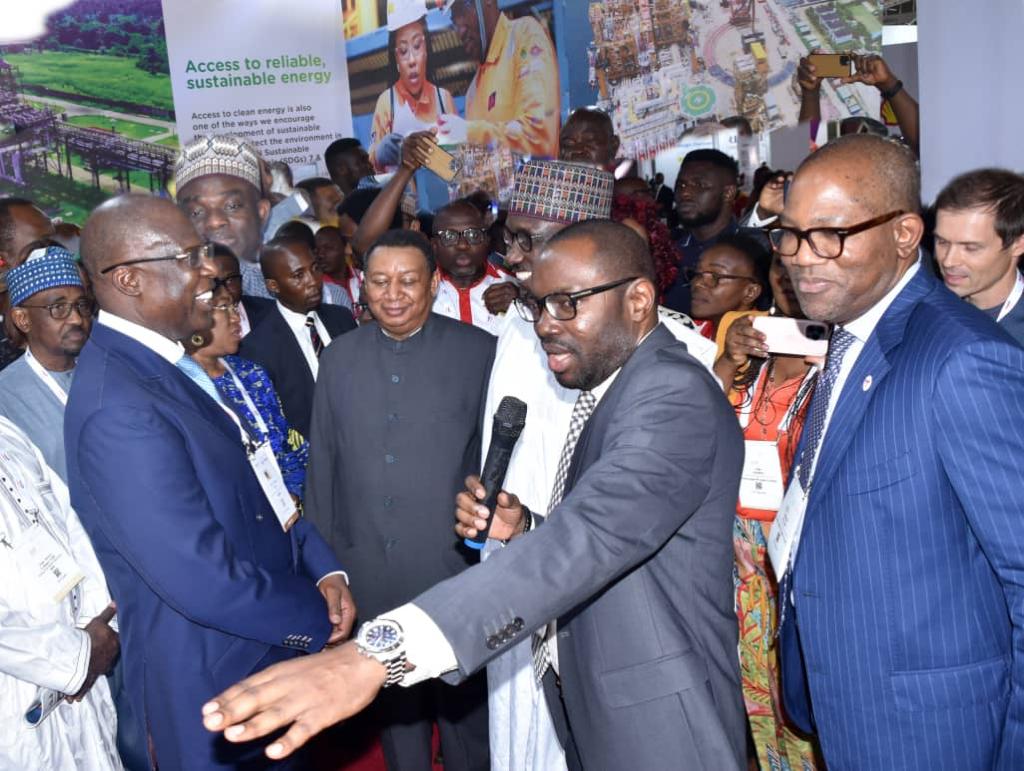 *The late Barkindo with other dignitaries being conducted round the TotalEnergies booth at NOG 2022 in Abuja, yesterday

Until his death in Abuja, Tuesday night, Barkindo was passionate about the growth of the oil and gas industry, worked assiduously to ensure the continued relevance of the commodity in years to come and while ensuring that countries rich in the resource reap the benefits it offers.
He passionately pursued and judiciously implemented the historic Declaration of Cooperation (DOC), which saw member countries of OPEC partnering with a number of key non-OPEC oil-producing countries, due to the urgent need to address the widening market crisis, stabilise the global oil market forestall the continued collapse of oil prices.
The DOC was especially useful during the initial period of the COVID-19 outbreak, during which the price of crude oil witnessed a significant drop.

Education
Barkindo graduated from the Ahmadu Bello University, Zaria, in 1981, with a Bachelor of Science (Hons) in Political Science. He proceeded to Oxford in 1988 and Washington University, United States, in 1991, where he obtained a Post Graduate Diploma in Petroleum Economics and MBA in Finance and Banking, respectively.

Barkindo, was a Fellow of the George Mason University, Fairfax, Virginia, United States (2013 to 2016), where he undertook research in the field of Energy, Climate Change and Sustainable Development; while he was awarded a Doctorate Degree in Science (Honoris Causa), Modibbo Adama, Federal University of Technology, Yola.

Career
Between 1982 and 1985, Barkindo worked with the Nigerian Mining Corporation, Jos, where he rose to the Level of Principal Administrative Officer, Liaison Office, Lagos; and was later appointed Special Assistant to the Minister of Mines, Power and Steel.

He participated as a member of the Oil and Gas Industry Reform Implementation Committee (OGIC) that produced the original draft Petroleum Industry Bill (2008), before serving as Group Managing Director/Chief Executive Officer of the NNPC.

According to a statement by OPEC, Barkindo also worked in several key roles at OPEC between 1986 and 2010; starting in 1986, when he was appointed to Nigeria’s delegation to OPEC, and from 1993 to 2008, served as Nigeria’s National Representative on the Organisation’s Economic Commission Board.

In 2006, he served as Acting Secretary General of OPEC, and represented Nigeria in OPEC’s Board of Governors from 2009 to 2010.

He helped produce the United Nations Framework Convention on Climate Change (UNFCCC) and the Kyoto protocol as the leader of Nigeria’s technical delegation to the UN negotiations since 1991.

He also served as Vice President of COP15 in 2010, when he chaired the opening session in Copenhagen attended by more than 100 heads of state and government, making him the longest serving member of the country’s delegation to the UNFCCC.
He also served as Chairman of the OPEC Task Force of the United Nations Commission on Sustainable Development for the 15th session.

Passion
Expressing his passion for the global oil and gas industry at the Nigerian Oil and Gas (NOG) summit in Abuja, Nigeria, Barkindo expressed optimism that with regard to demand for crude oil, there is only one direction, and that is up, projecting that total primary energy demand will expand by a robust 28% in the period to 2045, with crude oil expected is expected to retain the largest share of the energy mix, accounting for just over a 28% share in 2045, followed by gas at around 24%.

He said: “In other words, oil and gas together will continue to supply more than half of the world’s energy needs for many decades. These hydrocarbons are especially vital to the energy mix in regions like Africa, which will see massive population shifts and economic growth in the coming years. These developments increase the urgency of eradicating energy poverty.

“Inopportune remarks and efforts to discourage oil exploration and development are bound to sow the seeds of a more pronounced energy crisis and undermine global energy security. Moreover, they jeopardize efforts to achieve universal, reliable and affordable energy access for people across the globe, including those in developing countries.”
Barkindo was expected to step down as the Secretary General of OPEC and hand over the reins of the organisation to Haitham Al-Ghais.

An account of efforts to stabilize the volatile international crude oil markets prior to the covid19 outbreak and in the ensuing period thereafter wouldn’t be complete without adequate mention of the contributions of Mohammed Sanusi Barkindo.
He would be sourly missed.