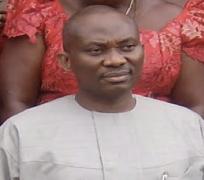 
12 April 2012, Sweetcrude, Abuja – The Economic and Financial Crimes Commission, EFCC, on Thursday said it has appealed against the ruling of the court which freed the former Senate Committee Chairman on Power, Senator Nicholas Ugbane, his House of Representatives counterpart, Hon. Godwin Elumelu, and Hon. Jibo Mohammed, and six others over corruption and criminal breach of trust charges.

A Federal High Court in Abuja had on March 24, 2012, absolved the former legislators of complicity in the 15-count criminal charge preferred against them by the EFCC, following alleged role they played in a N5.2 billion Rural Electrification contract scam.

The EFCC’s lawyers, according to the appeal documents obtained by our correspondent in Abuja, claimed that the trial judge (Justice M.G. Umar) had erred in law when in his consideration of the 8th respondent’s motion on notice dated July 25, 2011, he held that he was unable to find a prima facie case or complaint disclosed in the proof of evidence against the respondent.

They noted that, “The consideration of the question of whether or not a prima facie case has been disclosed against an accused is limited to the proof of evidence filed in support of the charge. The proof of evidence does not have to disclose absolute proof or evidence required at the trial stage; it is sufficient if a prima facie case is disclosed connecting the accused to the offence.

“Using the above-stated parameters, the proof of evidence before the court below clearly reveals a prima facie case against the 8th respondent in relation to the offences for which he was charged. The learned trial judge adopted a wrong parameter in reaching his finding – hence the error,” the lawyers stated.
Elumelu and eight other suspects were arraigned before Justice Abimbola Banjoko on a 65-count charge bordering on defrauding the government in the Rural Electrification Agency (REA) project.
They accused persons were standing trial for allegedly siphoning about N5.2 billion from the coffers of the Rural Electrification Agency domiciled with the Central Bank of Nigeria in the guise of paying over 65 alleged fictitious companies that were purportedly awarded contracts for Grid Extension and Solar Electricity project. The three sitting lawmakers had pleaded not guilty to the charges.
Ugbane, Elumelu and seven others were originally arraigned on October 30, 2009 on a 130 count charge. The charges were separated thus: The three lawmakers among them were originally and jointly facing a 62 count charge while the other six accused are jointly facing a 68 count charge.

One of the fresh count charges reads: “that you Senator Nicolas Yahaya Ugbane, Hon. Ndudi Godwin Elumelu, and Hon. Jibo Mohammed, sometime in December 2008, in Abuja within the Abuja Judicial Division of the High court of the Federal Capital Territory of Nigeria, while serving as the Chairman, Senate committee on power, Chairman, House of Representatives Committee on Power, respectively; abetted the commission of an offence, to wit: criminal breach of trust by public servants in the purported award of 4 (Nos) Solar Electrification contracts to Helping Hands International Ltd, cumulatively amounting to N119,669,654.28( One hundred and Nineteen Million, Six Hundred and Sixty Nine Thousand, Six Hundred and Fifty Four Naira, Twenty Eight Kobo Only) which contract were unlawfully awarded from the 2008 Amended Budget of the Rural Electrification Agency (REA); and thereby committed an offence contrary to Section 83(b0 and punishable under Section 85 of the penal code Act Cap 532 Laws of the Federation of Nigeria(Abuja) 1990.”