13 February 2016, Lagos –  The Nigeria Customs Service (NCS), Apapa Area one Command has said that it collected N23.4 billion as revenue for the month of January 2016. 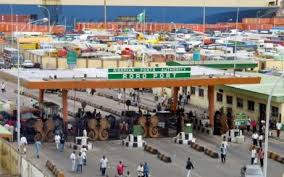 Disclosing this at the monthly stakeholders meeting organised by the command in Lagos, the Customs Area Controller (CAC), Comptroller Willy Egbudin charged clearing agents and importers to embrace transparency in all their transactions.

Giving a breakdown of revenue collected at the command in the past two years, Egbudin stated that in 2014 the command collected a total of N301 billion, while there was a decline in 2015 as only N288 was collected.

Egbudin, who was at various times the CAC of Lily Pond and Seme Commands, reiterated the command’s commitment in ensuring that the Apapa Command meets the target set for it in 2016.

“We will pray that this year we should be able exceed at least N300 billion to N400 billion or N500 billion and that is our expectation. So far, I do not think we are doing badly even though we are not meeting the target because for the month January this year we had been able to realise N23.4 billion compared to January last year which was N20.7 billion you know that we are starting well”.

The CAC stated that the command is starting on the right path to ensure that the service actualise the revenue target, even as he appealed with operators to comply with trade facilitation.

According to him, apart from the revenue collections and anti-smuggling, one other thing is to facilitate trade because it takes two to tangle.
“If you want your trade to be facilitated you have to declare honest declaration. You know that Apapa Area command is the flagship of customs service and if the service is to get right that means this command must get it right and if we are not getting it right, and if we are not get that means other commands are not getting it right,” he said.

He however, admitted that there has been a sharp drop in importation but added that with honest and transparent declaration, the target of N1.1 trillion target set for the service would be achieved.

THISDAY had reported that the Comptroller General of NCS, Colonel Hameed Ali (retired), had early this month said that the service has set a revenue target of N1trillion for itself this year.

Ali said that on receiving a revenue target from the Budget Office, NCS also had to set its own target.

His words: “We have not received the 2016 revenue target from the budget office yet but we normally set a target for ourselves and we are looking at one trillion naira for 2016. We hope and are working to block all leakages and making sure that our system works perfectly and hopefully the polices of government will also be in our favour. We hope to hit N1 trillion in 2016”
He disclosed that introduction e-customs has helped in revenue generation, and expressed optimism that the target would be met.

“Collection of revenue and interception of harmful imports have been made easier with the help of technology.

“In line with the change mantra of the present government, let me remind all operatives and stakeholders alike not to abuse the process and corrupt the system.

“Any act calculated to distort and compromise the integrity of e-customs will not be tolerated and will be met with appropriate sanctions.”