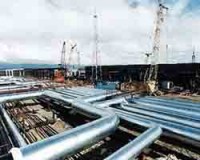 The group in a statement by its President, Nelly Emma; Secretary, John Sailor and Public Relations Officer, Mukoro Stanley, vowed to disrupt NNPC facilities in the region, the Escravos Tank Farm, the Abiteye Flow-station as well as onshore/offshore operations, recalling that the Escravos-Warri-Lagos Gas Pipeline suffered a major setback last year as a result of protest by Gbaramatu and Ugborodo women demanding for a better deal from NNPC and Chevron Nigeria Limited, CNL.

NDIMRC recalled that after a long delay, the management of NNPC and Chevron agreed to meet the demands of the Gbaramatu and Ugborodo people, and the firm handling the Escravos-Warri-Lagos Gas Pipeline project was allowed to go back to site.

But the group claimed that after the first phase of the Escravos-Warri-Lagos Gas Pipeline project had been completed, NNPC was yet to fulfill its part of the bargain to the people and vowed to disrupt the operations of the project expected to boost power supply nationwide.

The group said: “NNPC should not deceive the people; people of the Niger Delta region should not be fooled. We want to recall the promises made by Group Executive Director, Gas and Power of NNPC, Dr. David Ige to the peace-loving people of Gbaramatu and Ugborodo, when he visited the royal father of Gbaramatu Kingdom.

“It was after these promises that the Federal Government agreed to meet the demands of the Gbaramatu and Ugborodo people and work once again resumed at the Gas Pipeline Project.

“The sacked GMD of NNPC, Mr. Austen Oniwon failed to fulfill the promises made by NNPC management to the people and now the Federal Government is enjoying the project without anybody thinking about meeting the demands of the Gbaramatu and Ugborodo women. The women only demanded for the provision of drinkable water, hospitals and electricity.”