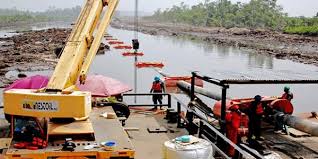 Lagos — Some communities within Oil Mining Lease, OML 42, in the Niger Delta have demanded the exit of Neconde/Nestoil Amt JV from their land over ‘debts and continuous breach of agreements’.

In a letter to President Muhammadu Buhari, the 14 communities accused the company of repeatedly failing and breaching agreements since it began operations in 2012, calling on the Nigeria Petroleum Development Company, NPDC to take over management of the asset.

According to the letter, the communities vowed to resist any move against their position, saying peace had eluded the areas since the firm arrived.

According to the letter, efforts by concerned authorities to get Neconde/Nestoil Amt JV to attend to the issues were unsuccessful.
The letter reads: “NPDC should manage assets of OML-42 till further notice, before any other competent, reliable and human-oriented operator comes.

“From the above facts …among others, the entire OML-42 communities have irrevocably declared that Neconde/AMT JV must leave our land now. We are prepared to die if there is any resistance or counter force to suppress us in our fathers’ land.
“This demand is expedient to ensure our continuous existence. We are dying in silence despite our outcry to concerned authorities caused by the operators without solutions.

“As an antagonist to Corporate Social Responsibilities (CSR), since 2012 till date, the Neconde/Nestoil/AMT JV had failed to perform its CSR to its host communities with unending excuses, showing ardent enmity to host communities’ development.”
The communities last year shut down flow stations operated by the company, making the country lose over 80,000 barrels of crude oil.

‘We’ve constructed over 300KM of pipeline since inception’ – Nestoil