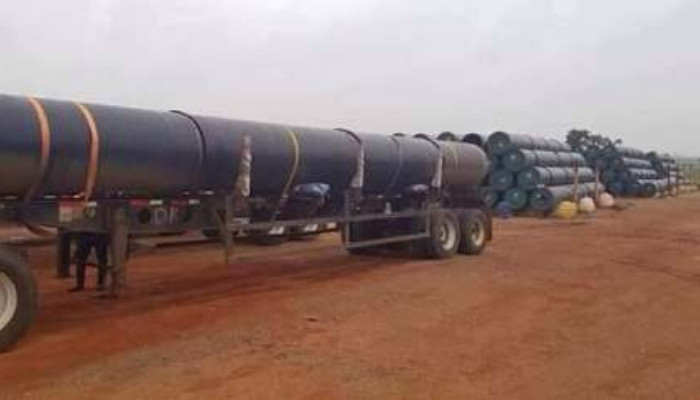 Abuja — The Federal Government, has flagged off the commencement of work on the Ajaokuta-Kaduna-Kano (AKK) gas pipeline project, stating that upon completed, the pipeline would speed-up Nigeria’s industrialisation.

Speaking at the virtual flag-off of the construction of the AKK Gas pipeline at the Ajaokuta and Kaduna camp sites simultaneously, President Muhammadu Buhari stated that the project, billed to be completed in two years, would provide gas for generation of power and for gas-based industries which would facilitate the development of new industries.

He added that it would also ensure the revival of moribund industries along transit towns in Kogi State, Abuja (FCT), Niger State, Kaduna State and Kano State, adding that the cascading effect and impact of the AKK, when operational, would be immeasurable.

He said: “It has significan job creation potential, both direct and indirect, while fostering the development and utilization of local skills and manpower, technology transfer and promotion of local manufacturing.”

Buhari affirmed the government’s commitment to ensuring timely delivery of the landmark AKK gas pipeline project within budgetary allocation and specifications, stating that the project was very dear to the people of Nigeria and must succeed.
The President, therefore, directed the NNPC and partners to remain focused, noting that the AKK project was part of the delivery of the present administration’s Next Level Agenda for sustainable development, enhancement of economic prosperity and increase of the country’s infrastructure assets.

He said: ‘‘We promised the nation that we will expand the critical gas infrastructure in the country to promote the use of gas in the domestic market. These include the Escravos to Lagos Pipeline System – 2 (ELPS-2), Obiafu to Obrikom (OB3) pipeline and AKK.

“These projects are fundamental to our desire to industrialize and energize the entrepreneurial spirit that is ever present in our population.”

The President appealed to Governors of Kogi, Niger, Kaduna and Kano States as well as the Minister of the Federal Capital Territory to provide the enabling environment and support for the project.

HR further disclosed that funding for the $2.6 billion AKK gas pipeline would be provided by the Bank of China and SINOSURE, while two Chinese firms would be working along with their Nigerian partners in the execution of the project.

He commended the Government of the People’s Republic of China; the financiers, the Bank of China and SINOSURE; and the two Engineering Procurement and Construction (EPC) Contractors for their support to delivering the important project.
The EPC contractors are Brentex/China Petroleum Pipeline Bureau-CPP Consortia and Oilserve/China First Highway Engineering Company-CFHEC Consortia.

Governors Yahaya Bello of Kogi State and Nasir El-Rufai of Kaduna, physically flagged off the commencement of works at the Ajaokuta and Rigachikun sites respectively, while the President participated remotely via video-conference from the Council Chamber in Abuja.

“We expect that along that corridor, all types of investments will now commence. We are expecting fertiliser projects, gas-based industries, like the petrochemicals and power plants among others. Actually, on the back of this project there is already going to be power plants to be built in Abuja and in Kano. The project would cost about $2.8 billion and is actually funded by China, like the president said.”