Lagos — The Nigerian Government has handed over the fishing vessel Marine 707 suspected to be carrying out illegal activities in the Gulf of Guinea to the Ghanaian authorities for further investigation and possible prosecution.

Nigeria also handed over 51 crew members including 48 Ghanaians and 3 South Korea nationals to the Government of Ghana and Korea respectively.

The vessel which had authorization to fish in Ghana and Benin waters was arrested by the Nigerian Navy on the 18th of May, 2020 around the southwest of Lagos waters with her Automatic Identification System (AIS) switched off after being suspected to be used for piracy or being used as a mother ship to conduct piracy in the Gulf of Guinea was handed over to the Nigerian Maritime Administration and Safety Agency (NIMASA) after preliminary investigations by the Navy.

While speaking during the official hand over of the Ghanaian flagged vessel and the crew to the respective authorities, the Director General of the Nigerian Maritime Administration and Safety Agency, Dr. Bashir Jamoh said that the Navy, NIMASA partnership which is now hinged on intelligence has put Nigeria on a pedestal of winning the war against piracy and other illegal acts at sea.

Jamoh who was represented by the agency’s commander, Maritime Guard Command Commodore Aniete Ibok disclosed that though preliminary investigations could not establish that the Vessel and her crew were directly linked to piracy, however the vessel still ran foul of international laws for shutting down its Automatic Identification System (AIS) 36 times in the last 6 months, 3 of which were done in the Nigerian waters. 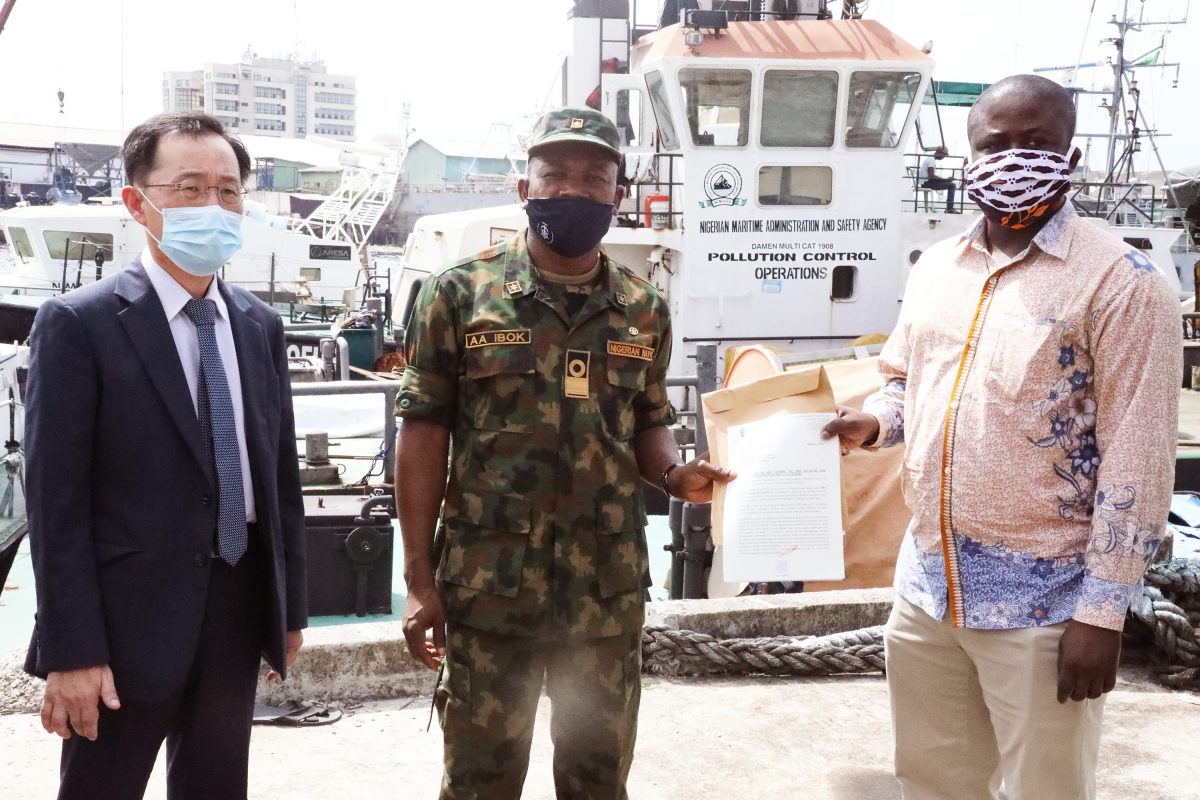 According to him “we are handing over this vessel to the Ghanian authorities in the spirit of bilateral cooperation both countries enjoy. We have done our preliminary investigations and we are yet to establish any concrete evidence against the vessel but again, we would not know what she would be doing whenever she turns off her AIS which occurred 36 times without being logged in her record book in line with international protocols and three of these were in our domain. However in the spirit of brotherhood that Ghana and Nigeria enjoys we are handing over the vessel to Ghana for further investigations”.

The NIMASA DG further warned that individuals or organizations thinking of perpetuating any form of illegalities in the Gulf of Guinea should be ready to face the full wrath of the law with the Antipiracy law in place along with the NAVY, NIMASA partnership that is waxing stronger with major focus on security in the Nigerian maritime domain and the entire Gulf of Guinea.

“we will not condone any act of illegalities in our maritime space, we have improved our intelligence sharing with relevant Agencies and with what we are doing now in no distant time piracy will be a thing of the past in the Gulf of Guinea because we have a robust antipiracy law that will deal with perpetrators of illegalities in our waters”

While receiving the vessel and the crew on behalf of the Ghana Maritime Authority, the Second Secretary Consular of Ghana in Nigeria, David Ako sowah commended the Nigerian authorities for being professional in handling the case. He said what Nigeria is doing is for the benefit of the entire countries in the Gulf Guinea.

In his words “As the big brother in this region, Nigeria has done well in showing a lot of maturity in handling this case and I want to assure you that Ghana would also look into more collaborations in Nigeria to ensure that the Gulf of Guinea remains safe for maritime activities”.

Equally speaking during the hand over, the Consular General of the Republic of Korea in Nigeria Kim Ln-taek, commended the party involved in handling the case. He said his findings from the Captain of the Ship who is a Korean informs that the AIS was bad. He noted that the vessel and her crew erred by not following the protocols of logging it in the record books when the AIS was down but he was happy that the case has been resolved up till this point.

The Ghana flagged vessel with International Maritime Organisation’s (IMO) number 7419755 and registration number 316880 is owned and operated by World Marine Company Limited, Japan and as at the time of arrest it had 51 crew on board with all being Ghanians except 3 who are from the Republic of Korea.

This case also brings to the fore the efforts of NIMASA and NAVY in the battle against piracy in the Gulf of Guinea. It would be recalled that the Navy recently arrested 10 pirates on a Chinese fishing vessel and handed them over for prosecution under the newly signed anti-piracy law.