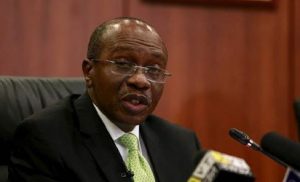 Oscarline Onwuemenyi
10 April 2018, Sweetcrude, Abuja – Nigeria’s foreign reserves have continued to grow significantly with latest figures by the Central Bank of Nigeria (CBN) at about $47.37 billion as at April 5.

The new figures rose from about $46.2 billion realised at the end of March.

The CBN Governor, Mr. Godwin Emefiele, announced the new balance in the reserves on Monday at the opening of the 25th seminar for Business Editors and financial Correspondents in Uyo.

Mr. Emefiele, who was represented by the newly appointed deputy governor, Corporate Services, Edward Adamu, said the CBN hopes to meet the $50 billion target before the end of the year.

Nigeria’s latest foreign reserves are about $4 billion more than that of South Africa.

South Africa’s net foreign reserves rose to $43.384 billion in March from $43.272 billion in February, the Reserve Bank said on Monday.

The forward position, which represents the central bank’s unsettled or swap transactions, fell to $1.996 billion from $2.057 billion.

“The decrease of 72 million dollars in the gross reserves reflects the foreign exchange payments made on behalf of the government.

“It was partially offset by the depreciation of the U.S. dollar against most currencies,” the South African central bank said.

Meanwhile, the Central Bank of Nigeria said it has finalised arrangements with Nigeria Export-Import Bank (NEXIM) to assist local manufacturers who are interested in non-oil exports, according to its governor, Mr. Godwin Emefiele.

The CBN governor said the bank had repositioned itself to improve the economy after exiting recession.

He noted that “In order to continue our gains in local production and help boost non-oil exports, we are in the process of finalising the creation of an N500 billion fund with the Nigeria Export-Import Bank (NEXIM) to assist local manufacturers interested in non-oil exports.

“In the area of Development Finance, the bank will continue to provide access to much-needed credit to sectors with the potential to create jobs on a mass scale.

“In this regard, we will explore opportunities to expand the Anchor Borrowers’ Programme to other crops and states.”

He added that the Monetary and Exchange Rate Policy of CBN would sustain the tight policies that have helped reduced inflationary pressures.

According to him, this is the reason the CBN has kept the Monetary Policy Rate (MPR) at 14 percent.

He said that the inflationary pressure would continue to ease, stressing that this might return to very low double digit or high single digit levels during the year.

He assured that foreign reserves would continue to grow following recent accretion to about US$50 billion later this year.

Earlier, the Branch Controller of CBN in Uyo, Mr. Okafor Nwokoro, said the bank had been in the forefront of advancing the frontier of knowledge in all spheres of national life and promoting sustainable economic development.

According to him, the CBN has ensured monetary and price stability, maintain external reserves to safeguard the international value of the legal currency.

He said that the bank intervention in anchor borrower’s programme has revolutionised the production of rice in the country.