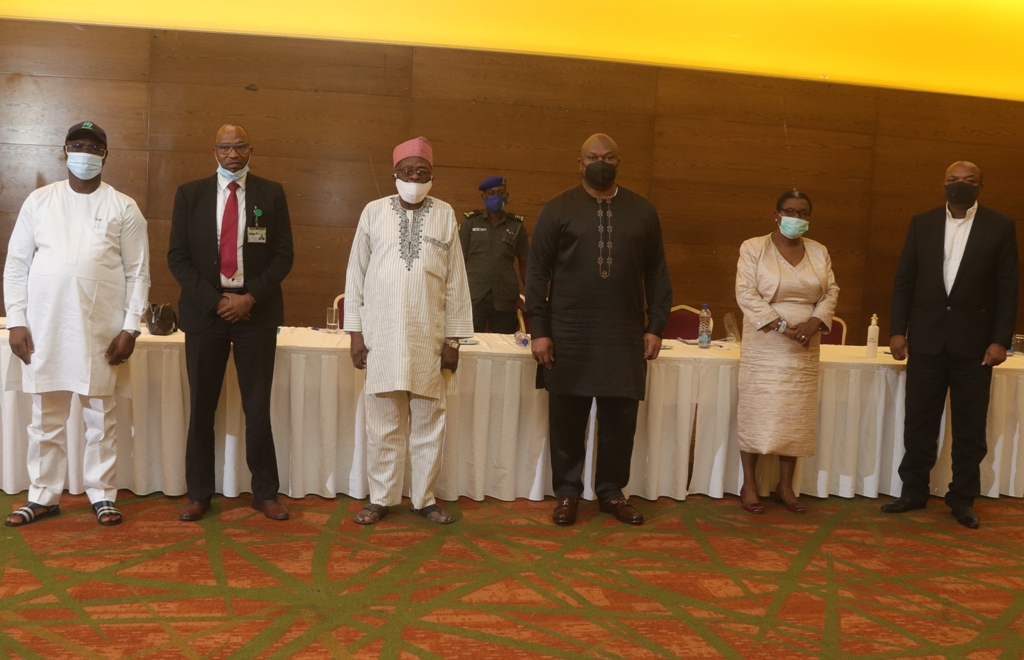 Lagos — The Nigerian Maritime Administration and Safety Agency (NIMASA) has assured stakeholders of its commitment to the protection of the rights and welfare of dockworkers as guaranteed in the International Labour Organisation (ILO) Decent Work Agenda.

The Agency’s Executive Director, Maritime Labour and Cabotage Services, Mr. Victor Ochei, gave the assurance in Lagos during a meeting of the National Joint Industrial Council (NJIC).
The meeting discussed a revised minimum wage and improved living standard for dockworkers through the Collective Bargaining Agreement (CBA) initiative endorsed by NIMASA and NJIC in 2018.

Ochei stated, “Dockworkers are integral to efficient and effective stevedoring operation and the NJIC has remained resolute in ensuring harmonious working relationships through the principle of tripartism and the execution of Collective Bargaining Agreements on minimum standards for the dock labour industry.”

Ochei, who is also Chairman of NJIC, extoled the efforts of the dockworkers to keep the maritime industry afloat, despite the COVID-19 pandemic. He said NIMASA was determined to ensure the dockworkers got what was due to them.

The Executive Director called on the council members to cooperate with NIMASA towards ensuring meaningful negotiations that would culminate in the signing of another CBA. He stated that the Agency had made necessary arrangements for successful council proceedings.

He added that the success of the exercise would further demonstrate Nigeria’s compliance and commitment to the ideals of the ILO Decent Work Agenda, which seeks to promote safe work, decent wage, and freedom of association.

The representative of the Federal Ministry of Labour, Mrs. Joyce Udoinwang, expressed the Ministry’s commitment to the welfare of dockworkers, assuring of its resolve to ensure no dockworker in Nigeria is short-changed. Udoinwang appealed for more cooperation from all the parties involved in the tripartite agreement.

President-General of the Maritime Workers Union of Nigeria (MWUN), Comrade Adewale Adeyanju, in his own remarks, commended NIMASA for midwifing the CBA, saying it has ensured industrial harmony and peace in the maritime industry.

Adeyanju disclosed that the NJIC would reconvene in the next few weeks to deliberate and agree on new wages for dockworkers. He called for the cooperation of the terminal operators and employers of dock labour to ensure the attainment of the Decent Work Agenda.

“So far so good, the terminal operators and employers of dock labour are doing their best, but so much can still be done to better the welfare of their workers,” Adeyanju said.

Speaking also at the meeting, the representative of the Seaports Terminal Operators Association of Nigeria (STOAN), Otunba Kunle Folarin, applauded NIMASA for its role over the years to promote peace and harmonious labour relations in the industry. Folarin said NJIC would cooperate with the Agency to sustain peace and sanity at the ports.

Other members of the NJIC, who were at the meeting, included the representative of the Nigerian Ports Authority (NPA), Mr. Charles Okaga, and President of National Association of Stevedoring Companies (NASC), Mr. Bolaji Sunmola. Both assured of their support towards improved welfare for seafarers.

It would be recalled that in 2018, NJIC signed a Collective Bargaining Agreement with NIMASA that elapsed on May 31, 2020. The CBA, which is for a two-year period, is intended to ensure industrial peace in the maritime industry. It involves requirements for the fair treatment of dockworkers, principally, making sure every employee gets an employment letter and a package of terminal benefits when their contract expires.