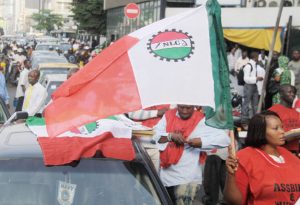 24 October 2017, Sweetcrude, Abuja – The Nigeria Labour Congress (NLC) Committee on the restructuring of the country on Tuesday submitted its report to the national body of the union.

Chairman of the committee, Mr. Ibrahim Khaleel, who led other members to submit the report, said that the committee worked assiduously to arrive at the final report.

He added that the report when unveiled would serve the interest of the Nigerian workers.

Khaleel said that the NLC was concern about the issue of restructuring, adding that it would not fold its arms while stakeholders discuss without the input of the workers’ union.

He said that it was not yet time for the content of the report to be made public, adding that the union must go through the processes, hence the need to submit it to the leadership of the union.

NLC President, Comrade Ayuba Wabba, who received the report, said that the committee was saddled with the responsibility of collating positions on issues arising from restructuring across the work force in the country.

“Nigerian workers will be happy with the outcome of this report and this is what they will canvass as their position on restructuring,” he stated.

He said that the report and the position of NLC would be made available after due consideration by all stakeholders.