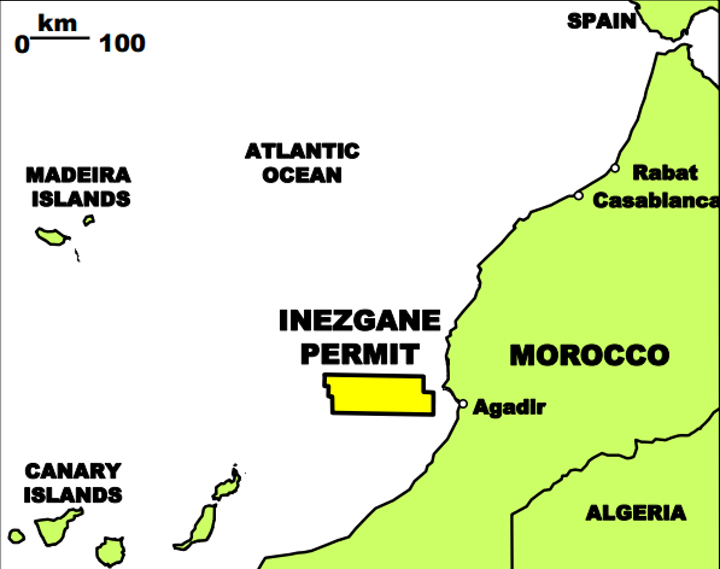 Rabat, Morocco — Europa Oil & Gas (Holdings) Plc reported Wednesday that it has secured an exploration license for a large area of the Agadir Basin offshore Morocco.

Europa noted that it expects to receive a formal letter of award for the Inezgane Offshore Permit from Morocco’s Office National des Hydrocarbures et des Mines (ONHYM) shortly and that it will be assigned a 75-percent interest in and operatorship of the license. ONHYM will hold the remaining 25 percent, Europa added.

Within the 4,335-square-mile (11,228-square-kilometer) license Europa will focus on the Lower Cretaceous fan sand play, which the firm stated is already a prolific producer in West Africa. The company also noted that its initial, low-cost work program under the eight-year Inezgane Permit is to mature several large stacked prospects – already identified in 502 square miles (1,300 square kilometers) of 3D seismic data – to drillable status ahead of farmout.

“We very much look forward to working with ONHYM in the initial phase of the license to mature prospects, which have the potential to hold up to 250 million barrels of oil each, to drillable status over the next two years,” Europa CEO Hugh Mackay said in a written statement emailed to Rigzone.

Only 10 wells have been drilled in deepwater Morocco, and only three of these wells have penetrated a complete Lower Cretaceous section, according to Europa. In addition, a presentation on Europa’s website notes that only two wells – Sandpiper and Falcon – have been drilled on the Inezgane permit. The license lies in water depths ranging from 1,968.5 to 6,562 feet (600 to 2,000 meters) and comprises three phases, the company also stated.

“The Inezgane Permit in Morocco is an excellent technical fit with Europa’s substantial license position in the Porcupine Basin in Ireland where, among other plays, we are also targeting the Lower Cretaceous,” said Mackay. “In terms of our investment criteria, Morocco ticks all the boxes: a stable country with a transparent business environment; excellent fiscal terms and low political and regulatory risk.”