Oil & gas book has an eye on the future 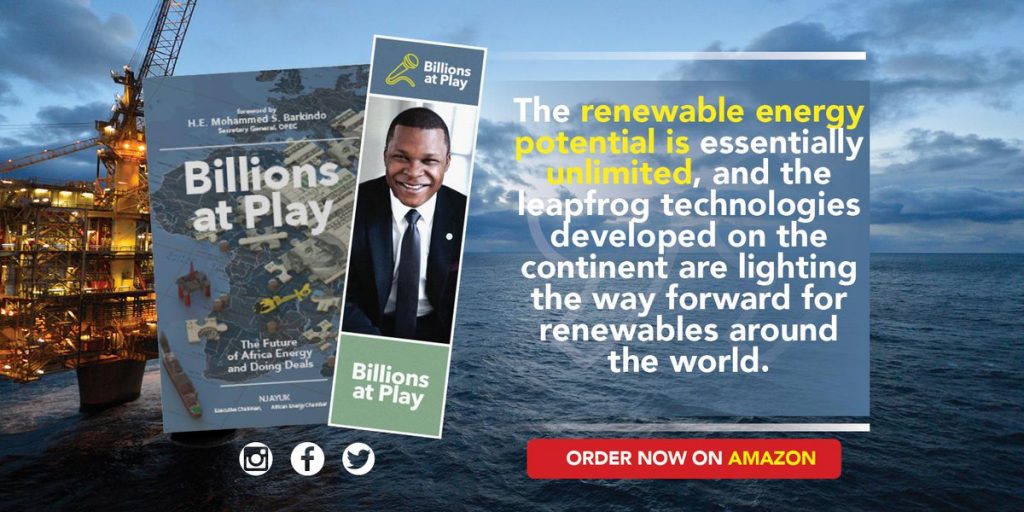 *Billions at Play: The Future of African Energy and Doing Deals.

JOHANNESBURG, South Africa — Talking about energy isn’t easy, especially at a time of widespread anxiety about the link between fossil fuels and climate change.

But NJ Ayuk, the experienced oil and gas dealmaker who heads the Pan-African legal conglomerate Centurion Law Group (CenturionLG.com) and serves as executive chairman of the African Energy Chamber has never been one to shy away from difficult conversations. Instead, he embraces opportunities to approach thorny questions head-on, with a spirit of optimism about the future.

This straightforward, upbeat approach is a hallmark of Ayuk’s newly released book, Billions at Play: The Future of African Energy and Doing Deals. That is particularly evident in Chapter 18, “Lights Out: Reforming African Power Generation Monopolies and Transitioning to the Future.”

In this chapter, Ayuk offers a lucid explanation of how to tie it all together. He shows how oil and gas operators can help Africa reconcile its urgent need for reliable electricity supplies and exciting prospects for oil and gas development with efforts to promote renewable energy and reduce emissions

Chapter 18 of Billions at Play describes:
How the unbundling of power generation and transmission will remove obstacles to growth in Africa.
How “technological leapfrogging” can propel Africa’s energy sector forward.
How African governments can encourage practical and responsible investment.
How oil and gas operators can forge a path towards expanding the use of renewable energy resources.
And much more.

“Ayuk believes that the majors need to begin thinking of themselves as energy companies, and acting accordingly. That means no longer simply extracting oil and natural gas, but harnessing Africa’s ample wind and solar resources then turning it into energy for the Africans. I couldn’t agree more with his position.”

Billions at Play has also been hailed by OPEC Secretary General Mohammad Sanusi Barkindo, who wrote its foreword:

“There is no stone left unturned in Mr. Ayuk’s analysis.”

Barkindo and Dr. Kgogo are among the many oil and gas industry leaders who have endorsed Ayuk’s prescriptions for growth and development:

“Ayuk puts forth a number of realistic solutions that anyone who cares about making Africa more self-sufficient will be eager to hear.” – Jeff Goodrich, former CEO of OneLNG

“In NJ Ayuk’s world, there are few villains, just people and businesses who can and need to do more.” – Bruce Falkenstein, Joint Operations Manager of License Management & Compliance for LUKOIL

“Everyone who has an interest in seeing Africa move in a positive direction should read this book. Mr. Ayuk doesn’t just lament Africa’s difficulties and throw up his hands. He looks for answers – answers that are executable and sustainable across the entire energy value chain.” – C. Derek Campbell, CEO of Energy & Natural Resource Security, Inc.

“Billions At Play: The Future of African Energy and Doing Deals” will be officially launched in Cape Town this week in the presence of several African ministers and the continent’s energy elite.