31 July 2018, Bengaluru — Oil prices are likely to hold fairly steady this year and next as increased output from OPEC and the U.S. meets growing demand led by Asia and helps to offset supply disruptions from Iran and elsewhere, a Reuters poll showed on Tuesday. 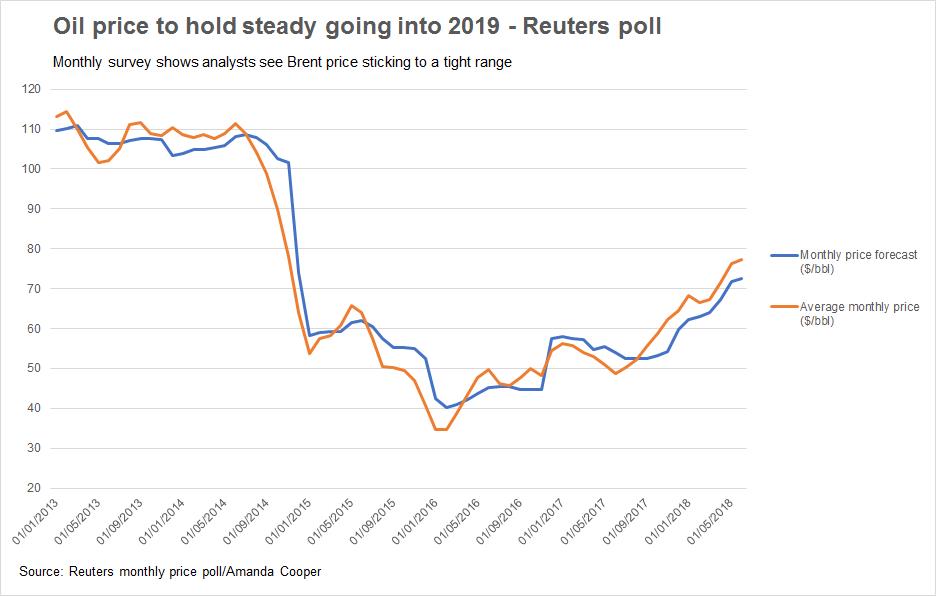 This is the 10th consecutive month in which analysts have raised their oil price forecasts.

“We expect prices will largely remain range-bound in the second half of 2018 and 2019. On the one hand, robust U.S. shale production and market concerns over the brewing U.S.-China trade war will help keep a lid on prices,” said Cailin Birch, an analyst at the Economist Intelligence Unit.

“On the other hand, the recent decline in global stocks will make prices more sensitive to any geopolitical risk, which will keep prices from falling significantly below current levels.”

The Organization of the Petroleum Exporting Countries (OPEC) and non-OPEC countries agreed to raise supply in a meeting last month to meet rising global demand, but the group did not specify a clear target for the output increase.

Meanwhile, U.S. sanctions on Iran that will come into force later this year will force a decline in exports and help support prices, analysts said.

The United States pulled out of an international nuclear deal with Iran in early May casting uncertainty over global oil supplies, and since then it has been preparing to work with countries to help them to cut Iran oil imports.

Analysts expect a drop of about 500,000-1 million barrels per day (bpd) in Iranian output due to the sanctions.

But they also said the ongoing global trade tensions could hurt demand.

“A trade war will slow down economic growth and demand for oil but also eventually spill over into other asset classes, mostly equities, that can have an impact on oil prices through a negative market sentiment,” Jette Jørgensen of Global Risk Management Ltd said.

Analysts continued to see Asia as the main demand driver, projecting an additional 800,000-900,000 bpd in demand this year and the next from the region.

“The market is facing different questions — Is global demand slowing due to weakening worldwide economic growth, will U.S. production keep up its incredible pace, will output in Venezuela keep plummeting, what will U.S. sanctions do to Iranian production, and is OPEC really willing to raise output up to 1 mbpd!” Frank Schallenberger, head of commodity research at LBBW, said.