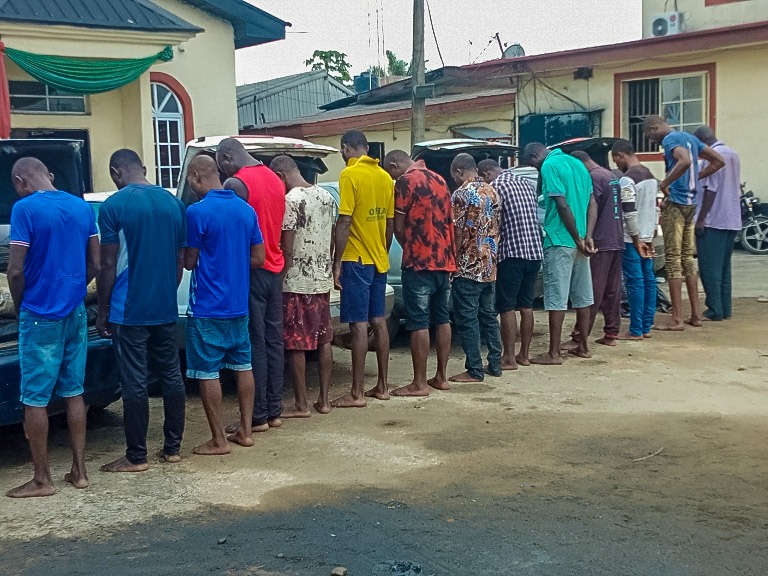 Port Harcourt — The Nigeria Security and Civil Defence Corps, Rivers State Command has arrested 14 suspects, with over 103,800 litres of Automotive Gasoline Oil in various local government areas of the state.

Parading the suspects, the Public Relations Officer of the NSCDC Rivers State Command, DSC Olufemi Ayodele, said the arrests were made possible following a marching order given by the State Commandant, Abu Tambuwal, who on his assumption of duty, declared that the war against illegal bunkering was non-negotiable.

Ayodele noted that the Command is currently under a new Sheriff in town with zero tolerance for all anti-government activities most especially the act of sabotaging the economy of the Nation through Vandalism of oil pipelines and illegal dealings in petroleum product.

While reaffirming the Command continuous synergy with relevant sister agencies, the PRO hinted that all the Suspects would definitely be charged to Court at the expiration of thorough Investigation.

“The first Suspect was arrested at Ada George Obio/Akpor Local Government Area with 18,000 litres capacity white Man Diesel Truck RIVERS MHA 435 XZ but a part of the content had been discharged before been apprehended by our operatives.

“Another Truck KADUNA MKA 701 ZF conveying 40,000 litres of suspected illegally refined AGO was also Impounded along Airport road. Four suspects were further arrested along a truck with number plate Ebonyi ZLL A3 XY in conveyance of products used for construction of illegal refineries.