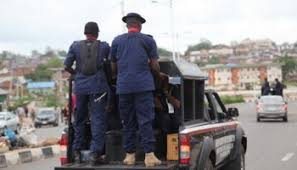 Port Harcourt — The Nigerian Security and Civil Defence Corps, NSCDC has confirmed the death of its personnel, Chief Corps Assistant Godwin Mbula, who was shot dead by unknown gunmen, during an attack on a manifold belonging to the Shell Petroleum Development Company of Nigeria Limited, SPDC, in Gio-Ogoni, Rivers State.

To this end, the NSCDC Commandant General, Abdullahi Gana Muhammadu, who confirmed this, has ordered a massive manhunt for the perpetrators of the dastardly act.

A statement signed by the Media Assistant to the Commandant General, Ekunola Gbenga, said the unfortunate incident occurred in the early hours of Saturday, when suspected oil thieves attacked the oil platform and shot at the security operatives.

Muhammadu in the statement called on citizens to support government and security agencies by providing them with helpful information as the public owes it a duty to the security bodies to identify criminals in their community.

According to him, “The incident happened in the early hours of Sunday when gunmen invaded Shell manifold located at Gio and shot at the victim.

“The gunmen suspected to be oil bunkerers had gone to the manifold known as Gio to siphon oil, but were resisted by the NSCDC men guiding the manifold.”

Muhammadu the nation was facing challenges with unrepentant vandals, adding that the Corps was also giving them sleepless time to reduce to the lowest minimum activities of vandals in the across the nation.

“Despite the attacks on our officers on daily basis, we have vowed to bring to an end to oil theft, bunkering activities and attack on all government critical infrastructures in the country.”

The NSCDC boss charged his men on the need to work closely with other sister agencies for effective policing, surveillance, intelligence and information gathering, with a view to ensure that the protection of lives and properties of citizenry is guaranteed.

He stressed that security agencies cannot work and achieve result without the cooperation of the people, adding that, it will take collective efforts of all security outfits to bring the perpetrators of this unrest to book.