Osinbajo says govt is fully committed to passage of PIGB 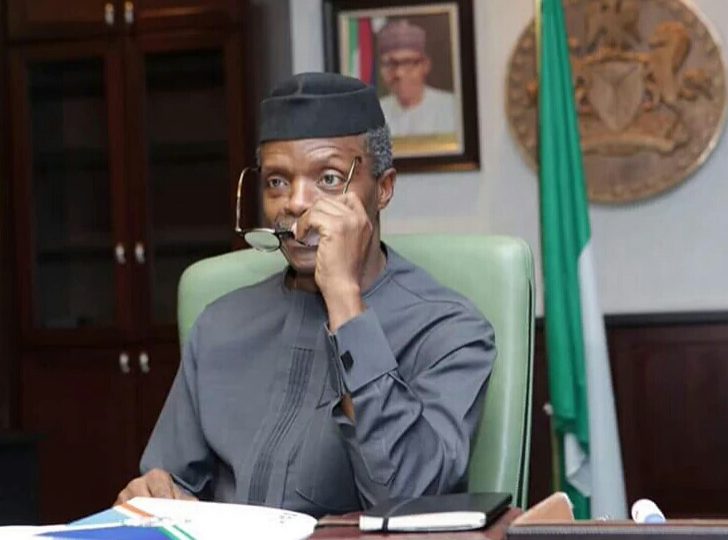 27 November 2018, Sweetcrude, Lagos — The Vice President, Prof. Yemi Osinbajo on Monday said the present administration remains fully committed to the passage of the Petroleum Industry Governance Bill, PIGB, adding that it is working closely with the National Assembly to ensure its timely passage.

Osinbajo who was represented by Dr. Ibe Kachikwu, Minister of State Petroleum Resources gave the assurance during his keynote address at the 18th international HSE Biennial conference, organised by the Department of Petroleum Resources, DPR in Lagos.

According to him, the proposed reforms in the PIGB reflects a collective desire to entrench transparency and sustainability of oil and gas operations in Nigeria to enable the country finally to realise the full potential of her hydrocarbon resources.

“It is noteworthy that the theme of the conference which is centered around sustainability dovetails seamlessly with this administration’s vision and policy for the Oil and Gas Industry as a vehicle for driving the industrialization and growth of the Nigerian economy in a transparent, responsible and sustainable manner.

“As a gathering of all stakeholders in the oil and gas industry, I am confident that your deliberations will yield important policies and ideas that will guide government in the formulation of policies for achieving sustainable development of not only our oil and gas resources.

“But also serve as a model for our other extractive industries that are not yet as mature,” he said.

According to the Vice President, no discussion about the future of the Oil and Gas can be divorced from the PIGB which represents the most ambitious and comprehensive reform in decades of the oil and gas industry in Nigeria.

He said while there have been various reactions to Mr. President’s recent decision to return the Bill to the National Assembly for slight amendments, however, the administration is still resolute about the reform its final passage will bring to the sector.

Osinbajo said resolving the security challenge in the Niger Delta remains on the front burner for the administration as it seeks to create a peaceful business climate that will attract investors and bring massive development to the oil producing communities.

He said the government is sensitive to the genuine agitations of the host communities for greater participation in, and control of oil and gas resources, however, the law and order element to the problem has to be tackled headlong to allow for a peaceful business environment.

“The proposals in the host community bill currently undergoing review represent a paradigm shift in the relationship between oil and gas operators and their host communities.

“And the government in collaboration with state government and other stakeholders is fully committed to comprehensive reforms that empower the communities and move them from stakeholders to actual shareholders and partners in the oil and gas business.

“This will result in the formulation of a comprehensive livelihood strategy and development plan for the Niger Delta to complement the efforts of the various interventions by the Federal Government through the Niger Delta Ministry (NDDC) and the amnesty program.

“The Federal Government’s commitment to the ease of doing business was reflected in the Executive Order 1 signed on May 18, 2017.

“The order had five main planks including Transparency; Default Approvals; One Government; Port Operations and Entry Experience of travelers and visitors. As the mainstay of the Nigerian Economy, there is a dire need for ease of doing business in the oil and gas sector.

“The current regime of multiple and sometimes conflicting regulators/regulations is a serious drawback on the ease of doing business in the petroleum industry.

“While we continue to seek to resolve these conflicts using the instrument of law, I wish to remind the various agencies and ministries of their primary responsibility to promote efficient service delivery and serve as the engine room for driving the collective policy of “one government”.

“`I, therefore, enjoin all the conflicting agencies to close ranks, finetune and improve cooperation and document their resolutions in binding MOUs that will ease the burden of over-regulation of the oil and gas sector,’’ he said.

“I am also pleased to announce to this gathering of Environmental experts that the government has fully commenced the clean-up of impacted oil spill sites in the Niger Delta”.

“This is a massive undertaking that reflects the Government’s commitment to restoring livelihood in the Niger Delta and deserves the support of all Nigerians,’’ added.