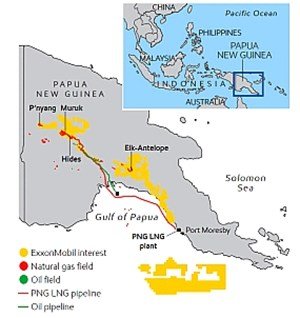 MELBOURNE — Papua New Guinea’s opposition leader, Patrick Pruaitch, on Friday pressed the nation’s prime minister to back a gas deal with France’s Total SA rather than seek changes and delay a $13 billion expansion of the country’s gas exports.

The government, led by James Marape, earlier this month suddenly called for talks with Total to revise the Papua LNG gas agreement, one of two needed for Total, Exxon Mobil Corp and their partners to go ahead with two major projects.

Neither Total nor the government have disclosed the status of talks, but Total’s partner in Papua LNG, Oil Search Ltd has said the companies believe the agreement, signed with Marape’s predecessor, Peter O’Neill, should be honored.

“Abrogation of the Papua LNG agreement signed in April will jeopardize prospects for PNG’s economic recovery and perpetuate the O’Neill government legacy of falling wages and employment levels,” Pruaitch said in a statement.
The prime minister’s spokesman and Petroleum Minister Kerenga Kua were not immediately available for comment.
A Total spokesman was not immediately available for comment. Oil Search had no comment, and Exxon Mobil has previously deferred all comment on Papua LNG to Total.

Oil Search Managing Director Peter Botten said on Aug. 20 the parties aimed to conclude talks by the end of this month, as the Papua LNG project had lined up bids from contractors to do preliminary engineering and design work. But those bids are due to expire in September.

The companies risk having to pull together new bids if the existing bids expire and could face higher costs if work gets delayed, Botten said.

Pruaitch said earlier works on Papua LNG as well as the Wafi-Golpu copper-gold project, led by Newcrest Mining, were the main factors behind hopes for returning the PNG economy to growth of more than 4% this year after the economy contracted last year.

Derailing the Papua LNG agreement, he said, would make that task extremely difficult.

“The actions could act as a signal to major international investors to avoid this country. We are treading a very dangerous path,” Pruaitch, the country’s former treasurer, said.