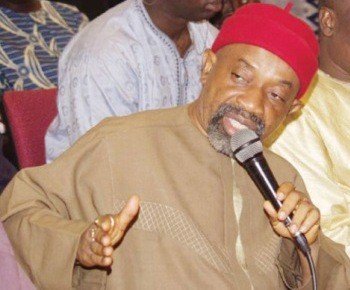 *Ngige at crossroad over matter

19 November 2017, Sweetcrude, Lagos — Despite the Petroleum & Natural Gas Senior Staff Association of Nigeria, PENGASSAN, picketing the headquarters of General Electric in Lagos in April over non-payment of outstanding allowances and salaries of sacked workers belonging to the association, SweetcrudeReports has learned that the matter is yet to be resolved.

The unpaid allowances and salaries had accumulated between 2007 and 2012.

The affected workers were those who worked in maintenance service of the Oboh/Ebocha/Kwale gas plant of GE and Agip Oil Company and contracted to Arco Petrochemical Engineering Company Limited.

SweetcrudeReports learned that after unyielding attempts by PENGASSAN to resolve the issue with management of Arco, the Minister of Labour and Employment, Senator Chris Ngige was drafted in, after which a meeting was held on November 30, 2016.

During the meeting, we learned, that GE had agreed to pay the salary and outstanding allowances immediately after Arco demobilised from the project site.

However, after Arco complied with the conditions of the agreement by completely withdrawing from the project site in February 2017, GE had failed to issue a purchase invoice as agreed.

Our source hinted that since Arco’s withdrawal from the site, GE had refused to “accept responsibility” and keeps “dragging its foot” despite a directive by Ngige to fulfill its promises.

“If after several contacts and meeting, including the fact that the minister had stepped in then, I am sorry to say that we are disappointed at GE for refusing to pay off the workers,” he said.

“And I must say this also, it appears that even the minister seems not to have the willpower to force GE into complying with his directive despite his position. Ngige is at a crossroad. He doesn’t know what to do, whether to please the masses for whom he is there or succumb to pressure from GE,” our source who pleaded anonymity added.

As a result, we learned that it was agreed at the last PENGASSAN’s National Executive Council, NEC meeting, that more pressure is put on Ngige over the matter.

“You just imagine how the matter had lingered yet, no solution is even in sight. The issue was even among those discussed at the last PENGASSAN NEC meeting, that more pressure should be put on the minister because he is the only person who can resolve this once and for all.”

The hardware upgrade and Operations Optimization digital solutions will help increase power output by up to 30 megawatts and will equip Azito with the insights it needs to increase efficiency and improve operations at the power plant.