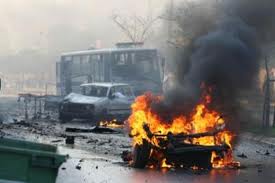 1 january 2012, Sweetcrude, SAPELE – RESIDENTS of Hausa quarters and environs in Sapele, Delta State have started relocating from the area following two explosions in less than one month for fear of being maimed or killed.

The first was at the Central Mosque on Palm Avenue Road, early, last month, in which one person was critically injured and part of the religious house shattered, and the second, few days to the New Year, at the Children Islamic School on Urhobo Road during which about 10 pupils were injured.

However, some of the panic-struck citizens, including the head teacher of the Islamic School that was hit with explosive, suspected to be dynamite, December 27, Mallam Mohammed Abdul Razaq , have called on the State Government and Police Command to provide around-the-clock security for the people.

It was learnt that the residents who reside near the scenes of the two incidents were frightened that they might be hit by explosives next time if they did not pack away from the area.

Mallam Razaq said the pupils, 10 of whom were injured in last Tuesday’s explosion and Muslim worshipers in Sapele need adequate security against further bomb attack.

One of the residents, Mr. Nathaniel Onorume, living about 100 yards away from the spot of Tuesday explosion confirmed that inhabitants of the affected area were relocating because of the fear of future bomb attack.

“It is the second tune within a mouth that unknown persons have detonated bomb in the area. The Sapele Central Mosque where a bomb was detonated barely a month ago is only two poles away from the Children Islamic School where another bomb was detonated, last Tuesday night,” he said.

A woman in her seventies who preferred anonymity corroborated the claim of Mr. Onorume and advised security agencies to put avoid further explosion.

On the fate of the 10 injured pupils, Mallam Razaq said they were responding to treatment at the various hospitals.

He praised the expertise of the medical personnel attending to the victims of the blast for a job well done.

Father of two of the wounded pupils, Alhaji Asad Mohammed also said that his children were recovering.

Asked if he would relocate his children from the school when they leave the hospital, he said it was not the practice for a Muslim to fear man, adding that it was Allah that protects and will pay every one according to his deed on planet earth.

Father of another affected child, Alhaji Hassan said his daughter’s leg was fractured but she was responding to treatment.

Four of the affected pupils were said to be receiving treatment at the Central Hospital, Sapele, while the daughter of Alhaji Hassan, a former special adviser to the chairman of Sapele Local Government Area, Hon Godwin Atose was said to be at the Delta State Teaching Hospital, Oghara.

Contrary to the claim that the explosion was the handiwork of a militant group, a Muslim faithful reiterated that the Tuesday night blast was a retaliatory attack on the sect of Muslims who bombed the Central Mosque, about three weeks ago.

According to him, The children of the worshipers that spearheaded the explosion in the mosque are known to be attending lessons in the Islamic school, just 300 meters away, so they targeted them for obvious reason”.

One of the teachers, Mohammed Abdulraqak said the children were taking Arabic lesson when a Toyota Camry car pulled close to the school and one of the occupants threw an object towards them in the makeshift classroom, adding that the object exploded immediately, wounding many of the children, all females.

Meanwhile, an Okpe Chief who preferred anonymity has donated food items, including beverages and money to the victims.