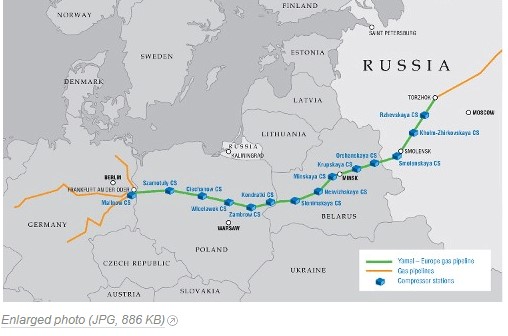 MOSCOW — Russian gas flows towards Germany via the Yamal-Europe pipeline rose over the weekend, preliminary data from German network operator Gascade showed, with no signs of being impacted by a political standoff between Belarus and the European Union.

Belarusian President Alexander Lukashenko said on Thursday that he could halt Russian gas flows through his country to Europe in a dispute with the EU, and the statement briefly pushed the spot gas prices higher.

The Kremlin was fast to say Lukashenko had not consulted it beforehand on the possibility of cutting gas supplies via Belarus. The gas transportation infrastructure is owned by Russian state gas pipeline Gazprom (GAZP.MM).

President Vladimir Putin said on Saturday that such a move would risk harming ties between Minsk and its key ally Moscow, adding that he would speak to Lukashenko on the issue. read more

Flows into Germany at the Mallnow metering point, which lies on the Polish border, stood at an hourly volume of over 10,000,000 kilowatt hours (kWh) on Saturday and Sunday, up from around 6,500,000 kWh/h an average on Friday, the data showed.

Exit flows at Mallnow – or gas transportation into Poland from Germany – were at zero, the preliminary data showed.