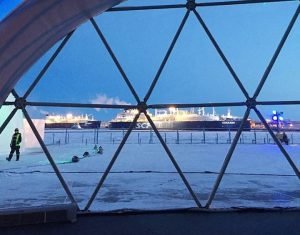 15 May 2018, News Wires – Russia’s largest independent natural gas operator, Novatek, is nearing a maintenance shutdown of its first liquefaction train at the Yamal LNG project in the Arctic.

The unit has been in production since December last year and has already shipped two million tonnes of the chilled fuel.

“We are preparing to start maintenance on Train 1,” Mark Gyetvay, company’s CFO told delegates at the Flame conference in Amsterdam on Monday.

He added that the company expects to start the second production unit in September-October.

The third production unit is expected to start production of the chilled fuel in December this year or January 2019, Gyetvay said.

The two million tons shipped from the facility so far have been spread across 27 cargoes onboard the Arc7 ice-class tankers carrying volumes from Yamal LNG to European terminals during winter, where conventional vessels pick them up for delivery to Asia or other higher-paying markets.

During Arctic summer, Yamal LNG will be delivering the chilled fuel to Asian-Pacific markets via the Northern Sea Route.

The first liquefaction train has the capacity to produce 5.5 million tonnes per annum.